Inspirations - The Dalek Invasion of Earth 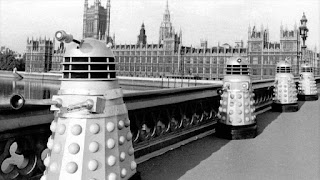 For the very first time we have the return of an alien race which has already featured in the series before. It is not a sequel, however. There will be very few pure sequels throughout the history of the programme. If anything, the Doctor's assertion that these are Daleks from an earlier point in their history to the ones encountered on Skaro makes this a prequel rather than a sequel.
Also, for the first time, one of the Doctor's companions leaves the TARDIS.
As story inspirations go, this one is very straightforward. The Daleks had proven incredibly popular with the viewers, helping to establish the fledgling show, and so writer Terry Nation was tasked with coming up with a new story featuring them. It was in his best interests to do so, as he had a lucrative financial stake in the monsters.
In the first story, the Doctor and his companions had gone to them - visiting them on their home planet of Skaro. For the rematch, the Daleks would come to us.
This story sees the first of the alien invasion genre in the show, and Nation looks once again to H G Wells for inspiration. The Daleks (aka "The Mutants") had borrowed heavily from The Time Machine, with the Morlocks / Daleks and the Eloi / Thals. The Dalek Invasion of Earth looks to The War of the Worlds. Nation even has a character called Wells.
The Martian war machines are armoured constructs with alien creatures ensconced within - just like the Daleks. They have invaded the whole planet, but we focus on the impact they have made on London and the Home Counties. 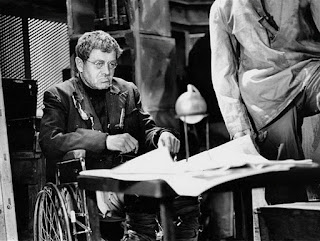 The genocidal Daleks were born out of Nation's experiences growing up during the Second World War, and this provides further inspiration for this story. What if the Nazi's had invaded, and actually won the war? There is a film called It Happened Here, which was a documentary style drama, with a mostly amateur cast, which depicted a United Kingdom that had been taken over by the Germans. It was released in September 1964, two months before Nation's story was first broadcast. This is probably too late to have had much impact on the Dalek story. Alternative histories, in which crucial points of history were turned on their heads, were popular in pulp science fiction. They remain so, as we have recently had a BBC adaptation of Len Deighton's SS-GB, and The Man in the High Castle, from a story by Philip K Dick, is doing very well for Amazon at the moment.
So The Dalek Invasion of Earth is a look at what might have happened if the Nazi's had invaded. This makes the Rebels of London the UK equivalent of the French Resistance. Scientist Dortmun, Jenny, David Campbell and Tyler are members of the Maquis, whilst the two women who hand Jenny and Barbara over to the Daleks are collaborators.
It is interesting that Dortmun is confined to a wheelchair, and makes spherical bombs. You half expect them to have "Bomb" written on the side, and to have fuses that you light with a match. Nation will have a thing about scientists in wheelchairs, though Dortmun might owe something to Joseph Conrad. 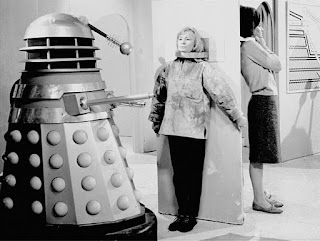 The mine workings in Bedfordshire resemble a forced labour camp. Wells refers to the Black Dalek as the camp's Commandant. As their plan nears fruition, one of the Daleks excitedly describes it as the "final solution" - the term used by the Nazis to describe their genocidal policies.
The black marketeer Ashton draws on elements of the Spivs, who furnished the wartime population with goods that weren't available on the ration book. Usually young men of fighting age, they were despised by the people, but tolerated for the service they provided. The comedy series Dad's Army would feature the character Walker, who was a Spiv.
In Nation's original drafts, the Doctor and his companions would have encountered "Subterraneans" in the sewers - pale faced people who had lived down there for years. They got removed from the finished scripts, and Susan instead encounters an alligator. It was a popular urban myth that the sewers of New York were full of these, flushed down the toilet when they grew too big to be exotic pets, and who flourished in that environment.
The idea of the Robomen is another old pulp Sci-Fi notion - with alien invaders making people their slaves by surgically suppressing their will.
In trying to foment a revolt, Barbara tells the Black Dalek about an imminent attack on the mine workings. She mentions the Indian mutiny. Nation had been working on a story set during this period, "The Red Fort", which he had to set aside in order to write the new Dalek story. One idea for a new companion to replace Susan was a young Anglo-Indian girl named Saida, who would stow away on board the TARDIS after the Doctor left Susan with David. Saida then became Jenny, but she would be left behind and the new companion wouldn't be introduced until the following story.
Carole Ann Ford had felt increasingly frustrated with her scripts, as they failed to give her any character development, save for The Sensorites. She is reduced to a gibbering wreck in The Reign of Terror, seemingly preferring to face the guillotine rather than find the energy to escape. The romantic sub-plot with David Campbell was therefore introduced to give Susan a reason to leave at the conclusion of this story. The seeds are laid throughout - handled far better than the later departure of Leela, for instance. Nation's draft script actually has David propose to Susan, which the Doctor witnesses just before he enters the TARDIS - finally making his mind up to leave her on Earth. He knows her loyalty to him will mean her breaking her heart in leaving the young man, so makes the decision for her.
Hartnell's famous farewell speech was to have been longer, but the studio was already 15 minutes over time when it was recorded.
Next time - the new companion.
Posted by GerryD at 23:38