B is for... Blackbeard 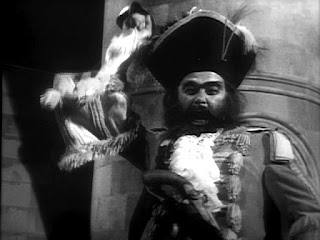 Blackbeard the Pirate was one of the figures summoned up by the Master of the Land of Fiction when battling with the Doctor, whom he wanted to replace him. At first he had used swordsman Cyrano de Bergerac, but Blackbeard seemed better suited to defeat the Musketeer D'Artagnan. The Doctor countered by having his champion change into Sir Lancelot, in full armour and on horseback.