B is for... Blowfish 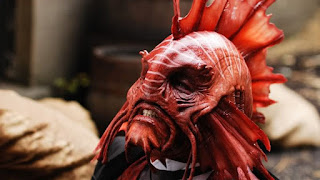 An obscure alien species, they are bipedal but have bright red piscine features, with prominent crests. They can survive in water or on land. They have a reputation for criminality and general trouble-making, fond of thrill-seeking. They visited Earth a number of times via the Space / Time Rift that ran through Cardiff.
Captain Jack Harkness encountered one on the day he was forced to join the Torchwood organisation, in 1899. Unable to send it back home, Torchwood operative Alice Guppy shot it dead. This prompted Jack to insist that in future all alien creatures should be incarcerated rather than killed.
Whilst Jack was away travelling with the Doctor and Martha Jones, Torchwood had to chase a Blowfish who was high on drugs and who had stolen a sports car. It paused to allow an old lady to cross the road, however. It ran into a house and took the family hostage. Jack reappeared, shooting the creature through the head before it could harm the humans. It later transpired that the creature was in league with Captain John Hart. In its pocket was a small pyramidal object that he thought would lead him to a fabulously wealthy gemstone. 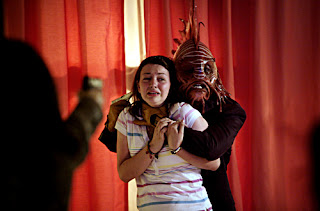 In 102 AD, the Blowfish were members of the Pandorica Alliance. In the far future, a Blowfish was to be found among the patrons of the Maldovarium when Colony Sarff arrived in search of the Doctor. The head of a Blowfish, or a replica of one, could be seen in "Hedgewick's World of Wonders", in the collection presided over by Mr Webley.