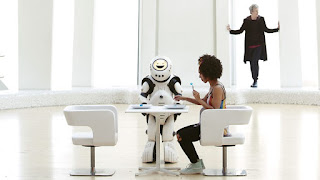 First of all, let's get the look of last night's episode out of the way. Traveling to Valencia to film really paid off. The cityscape, and the sweeping vistas of wheat fields were beautiful to look at. It was such a pity that the plot then moved into the spaceship interior, which was plainly yet another factory location.
Apart from a brief appearance by Nardole at the beginning, plus the two colonist women, the first half hour was pretty much just the Doctor and Bill. Knowing that Ralf Little was appearing, I kept looking at the clock and wondering if it would be worth his while ever turning up. (It wasn't - a real waste of a good guest actor. Same with Mina Anwar, who was so good as Rani's mum Gita in The Sarah Jane Adventures).
So, for much of the running time it is just the Doctor and Bill. He deduces what is going on, whilst she is still in educating-new-viewers mode by asking all of those questions which have already been asked and answered for longer term fans. Had there been any aliens this week, she would no doubt have asked the one about how she could understand them.
Watching the Doctor work out what was going on in this seemingly deserted colony was interesting, as we already knew what was afoot. 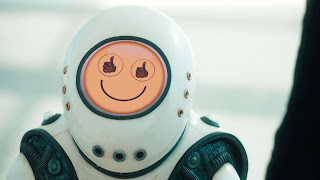 The robots - both the tiny flying Vardies and the cute little Emojibots - were killing people who weren't happy. Helen A could have done with some of these on her colony world in The Happiness Patrol. Once again, we have technology designed to help humans acting against them due to over-literal programming. Just like last week. The Doctor works out that this was all caused by them encountering grief, which spread through the human community following the death of a much loved elder. The robots have been programmed to make sure everyone is happy, so they eliminate sadness by killing people and turning them into fertiliser for the gardens. As a threat, they didn't quite work. The Doctor and Bill simply ran out of the city. While they were back at the TARDIS, why didn't they remove their emoji badges, by the way? 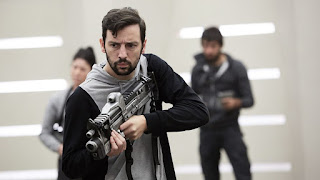 The Doctor decides he's going to blow up the city - only to later discover that the colonists have already arrived. They're in cryosleep in the spaceship at the heart of the complex, which is where Ralf Little comes in. The Doctor makes reference to having encountered a number of craft which have fled a dying Earth - something which has caused a few continuity headaches for fans. Little announcing he is a Medtech obviously reminds us of The Ark In Space, where Medtech Vira was the first of the crew to be reawakened. The Doctor states that Gliese is one of the first Earth colonies, but that can't be the case if these people have come from the dying Earth. The history of Doctor Who is littered with much earlier colonies. Then again, the Doctor does get things wrong. He says so here, when he admits to not having recognised a nascent AI lifeform.
The name of the spaceship is significant - The Erewhon. This derives from the book by Samuel Butler, published in 1872. This features a Utopian place (the name taken from "Nowhere" backwards, with the W and H transposed). This place does not allow machines, as they are thought to present a threat to humanity, which is exactly what the robots here pose.
This season's story arc gets a mention, but not in any way that moves the mystery forward. We already know that he has promised to guard the Vault. Who he promised this to, and why, are still for a later episode.
Overall, it was a good episode, but certainly not a great one. If it was intended to further introduce us to Bill and some of the series' core tenets, then it succeeded. It just needed a bit more oomph.
Posted by GerryD at 21:38