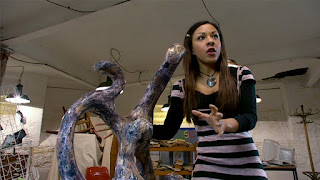 One of the members of LINDA - the London Investigation 'N' Detective Agency. This was a small group of people who were obsessed about the Doctor. Bliss was an artistic soul, who at one point created a sculpture which she felt represented the Doctor's essence. She fell victim to Victor Kennedy - really the alien Abzorbaloff. When she vanished from the group, Kennedy claimed she had gone off to get married. Unfortunately, her face had ended up on his backside. With her other absorbed friends, she helped destroy the Abzorbaloff and save Elton Pope.