Inspirations - The Reign of Terror 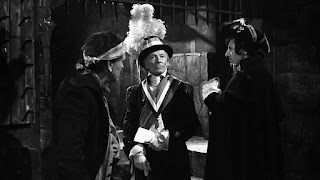 AKA "The French Revolution", which was its working title.
Like the Doctor, this is one of my favourite periods in History. Not that I would ever want to have been caught up in it, of course, but studying why the Revolution took place and how it unfolded is something I have always found fascinating. There was no one Revolution. Rather, it was a series of upheavals over ten years, as one political faction rose to prominence only to be cut down by the next. The Reign of Terror was just one such episode - albeit the bloodiest.
How do we know that this is a favourite period for the Doctor? Well, Susan says so, to the two school teachers. It is implied that she and the Doctor may have already visited France during this period, as she immediately spots a mistake in a book Barbara lends her, back at Coal Hill School.
There is no one single cause for the Revolution. Its seeds lie in the religious wars that had blighted Europe for centuries. France had embarked on a couple of unsuccessful conflicts which had drained the economy. The country then faced a period of poor harvests, and the people were starving. Substantial amounts of tax were going to the rich and powerful Church. Most French peasants were little more than serfs.
A number of bread riots broke out in Paris in 1789, culminating in a march to the royal palace at Versailles to demand assistance from King Louis XVI. He was generally liked by the populace, though they hated his Austrian wife Marie Antoinette, and his predecessor Louis XV had been very unpopular.
The old prison fortress of the Bastille was stormed. Believed to be holding many political prisoners, it was actually almost empty, and some of those that were incarcerated there died in the assault.
King Louis agreed to the setting up of a parliament or assembly, made up of the three great sections of French society - the nobility, the Church, and the people, who were represented by a number of political radicals who had learned a great deal from the recent American Revolution.
The assembly failed to reach any kind of consensus, as the nobility and the Church refused to concede anything of note.
Things continued to break down. By 1792, the royal family were being held virtual hostages in Paris. A republic was announced, and the King branded a traitor. First Louis, and then his Queen went to the guillotine. The Revolution was supported by the army, which was also fighting abroad at this time in other parts of the continent.
Various republican parties came to the fore, but all were superceded by political rivals. In 1793, the Jacobin faction came to power under Maximilien de Robespierre, who set up what was basically a dictatorship. The old calendar was thrown out and the Committee for Public Safety began the wholesale slaughter of anyone perceived to be its rivals.
And this is where the TARDIS crew come in. 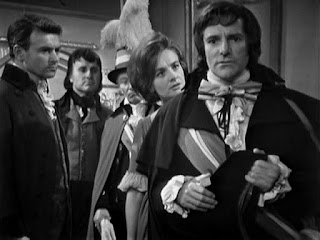 Writer Dennis Spooner sets his story at this particularly dangerous moment during the revolutionary period. Hundreds of enemies of the state are going to the guillotine on a daily basis. We're coming towards the end of Robespierre's time, when his political rivals are starting to question his tyranny. He was an incredibly vain man, with little or no social skills. Some of his schemes were scoffed at. He had ideas about a great divine being, which smacked of replacing one god with another.
Spooner is inspired not only by historical events, but by two great pieces of literature, set during the Reign of Terror. One of these most of the viewers at the time will have read, whilst the other would have been better known from a popular movie.
The one that people would have read is Charles Dickens' A Tale of Two Cities. Anyone not having read it would probably have seen the film starring Dirk Bogarde in the Sidney Carton role, or the earlier one with Ronald Coleman. The other story is The Scarlet Pimpernel. The book was written by Baroness Orczy in 1905. It had been made into a movie in 1934, starring Leslie Howard. In a couple of year's time, it will inspire a Carry On film, with Sid James as The Black Fingernail.
The Scarlet Pimpernel deals with an Englishman, Sir Percy Blakeney, who appears to all the world as a decadent fop. However, he has an alter-ego - the Pimpernel - who sneaks back and forth to France and helps members of the aristocracy to escape from the guillotine, smuggling them back to safety in England. A pimpernel, before you ask, is a small flower of the primrose family.
The character of Le Maitre (the Master) proves to be an English spy - James Stirling - who is secretly assisting the escape network, whilst at the same time getting close to Robespierre to discover his plans. 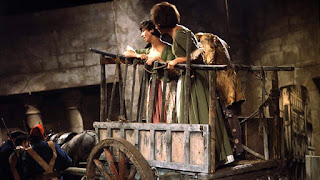 Ian, Barbara, and Susan get locked up in the Conciergerie Prison when they are captured and taken to Paris. This still exists - on the Ile de la Cite opposite the Louvre. It was built as a medieval palace for the Merovingian kings and was turned into a revolutionary prison. You can still see the cell where Marie Antoinette was held. Barbara and Susan are taken from here in a tumbril to be executed, but Jules Renan - senior member of the escape network - intercepts them in an ambush and frees them.
Tumbrils were two wheeled agricultural carts, which were emptied by tipping them backwards - mainly used for hauling grain and manure. Executions in Paris were held in the Place de la Revolution - formerly Place Louis XV, and now Place de la Concorde. The guillotine was regarded as a socially leveling means of execution, as befitted revolutionary ideals. Previously, under the Ancien Regime, the nobility had been executed by alternative means to members of the ordinary populace.
In Dickens' novel, Sidney Carton, a rather dissolute young man, takes the place of a prisoner to allow him to escape, and goes to the guillotine in his place. The Doctor's companion Mel references this when the Sixth Doctor travels by tumbril to his supposed execution towards the conclusion of The Trial of a Time Lord.
Executions were major spectacles for the masses, who thronged the square. Programmes of a sort were sold - detailing the names of those to be killed that day. The tailor from whom the Doctor purchases an Official's costume, remarks on his regret at having to miss that day's executions. Attendance would have been seen as loyalty to the cause, and those who refused to attend would have been regarded as potential traitors. The Doctor puts himself at risk by challenging Robespierre's methods. He claims to be representing a region where the execution figures are not very high. A region's loyalty would be judged by the number of enemies of the people whom it eliminated. Whilst the guillotine was the favoured means of despatch, in one city a whole load of prisoners were held in an old ship which was then deliberately sunk in the middle of the river.
The Paris prisons were so full at this time that trials were brief affairs that could only have one allowable sentence - execution. This was a special law brought in to tackle overcrowding just at the time when the time travellers have arrived - hence Barbara and Susan being whisked off in a tumbril within hours of their incarceration. 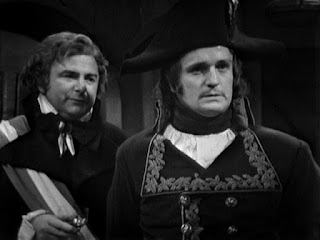 The bulk of the material featuring Robespierre is missing from the archives, but the final episode introduces two more historical personages. We first see Paul Barras - Paul Francois Jean Nicolas, Vicomte de Barras, to give him his full name. Ian and Barbara witness him trying to recruit the Corsican army officer Napoleon Bonaparte to help shore up his planned coup against Robespierre.
Spooner gets things wrong by having Robespierre quote a date that doesn't match the Jacobin calendar - though it does let the viewers in the know realise that he is about to fall.
The jury is out as to how Robespierre came to be shot in the jaw. One theory is that he tried to commit suicide, whilst another has it that he was deliberately shot in the mouth to shut him up. Whatever, he went to the guillotine within hours of his arrest, and it is said that when the executioner removed the bandage around his face, the shattered jaw came away with it.
The Reign of Terror was supplanted by the Directory. There was one further attempt by the Jacobins to retake power in 1795, but this was crushed. The Directory spent most of its time fighting foreign wars and being generally corrupt and self-serving at home. So much so that Napoleon staged a popular military coup that put the Directory out of power, and led France on the path to the Empire. 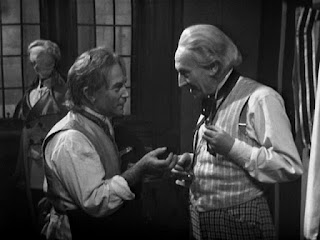 It is to the French Revolution that every subsequent revolutionary movement has looked, with its ideals of Liberte, Egalite, Fraternite. France itself was not done with Revolution - as any fan of Les Miserables will know. Revolutionary ideals were still alive in Paris in 1968.
Last time, I promised you a Woody Allen joke. Writing about the causes of popular revolutionary movements, he claims that the Russian Revolution was provoked when the people realised that the Czar and the Tsar were really the same person...
A few final points. The distance to Paris is quoted in kilometres. This is an anachronism. The kilometre did indeed originate out of the French Revolution, but not until a year or so after the Reign of Terror.
The Fourth Doctor mentions Marie Antoinette on two occasions. He claims in Pyramids of Mars that his picklock belonged to her. Does this mean that she might have escaped execution if it hadn't been for the Doctor? It certainly suggests a visit to France just before the events of this story. He then compares the crew of the Sandminer to her, in The Robots of Death, unable or unwilling to countenance a revolution taking place under their noses.
The story's composer - Stanley Myers (his only work on the show) - frequently riffs La Marseillaise. This was composed in 1792, and was adopted as the anthem for the Republic.
Next time, Dixon of Dock Green saves the Environment...
Posted by GerryD at 00:31