B is for... Bloodaxe 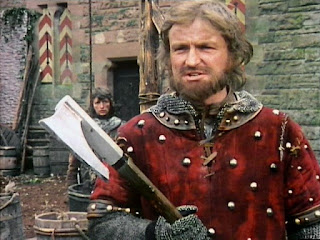 Deputy to the medieval warlord Irongron. Bloodaxe believed that his chief had a towering intelligence. When a shooting star fell to earth near the castle they had taken over, Bloodaxe refused to go and look until the sun had come up. He mistook the Sontaran Linx for a Saracen. He was later shocked to see the alien without his helmet. It is to be presumed that Bloodaxe had a number of siblings. All the smart genes must have gone somewhere in his family. Only his sword and axe were sharp. Sir Edward of Wessex's archer, Hal, roused Bloodaxe and his men from a drugged sleep so that they could flee from the castle before it was destroyed by Linx's exploding starship. He would have probably taken over from the now dead Irongron.