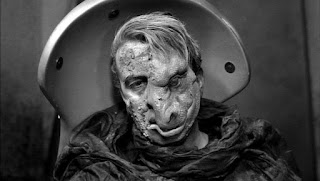 The Doctor first visited the planet Karfel in his third incarnation with Jo Grant and another travelling companion - possibly UNIT's Captain Mike Yates. He befriended a scientist named Megelen, but was forced to denounce him to the authorities because of his unethical experiments with the indigenous Morlox creatures. These were large and savage reptilian quadrupeds which lived in tunnels beneath the Karfelon citadel.
Megelen continued his work undaunted, and one experiment using the gas Mustakozene-80 caused a cellular hybridisation. The gas mimicked Morlox pheromones, causing one of the creatures to attack him just as the substance merged their DNA. Megelen was left mutated - part-humanoid and part-Morlox, but with increased strength and longevity.
He was somehow able to overthrow the leadership of the planet and install himself as the new ruler, taking the title of Borad. Because of his mutated appearance, he kept himself hidden away in a fortified vault and created a public face for himself - using an android of an old man to act as his official appearance on video screens. 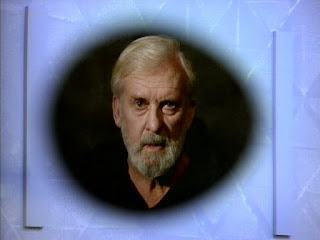 Megelen then set about experimenting with temporal physics. He created a device called the Timelash, using Kontron crystals, which acted as a time tunnel. His enemies would be thrown into it, and no-one knew where it lead. Other time technology enabled him to create a weapon that could age people rapidly to death.
The Sixth Doctor was drawn back to Karfel when the TARDIS clashed with the Timelash tunnel. A councillor named Vena had stolen one of the keys which the Borad needed to transfer power to his vault, and had fallen with it into the Timelash. Tracing the tunnel to the planet, the Doctor found that the Borad was detested as a tyrant, prepared to see his people die rather than have his experiments upset. He also seemed hell bent on provoking a war with the neighbouring Bandril race.
The Doctor was coerced into going after Vena - learning in the process that the Timelash actually lead to medieval Scotland - though the TARDIS had deflected her to the late Victorian period. 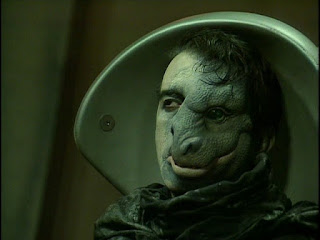 On his return to Karfel, the Doctor went to the vault and discovered that the Borad was really Megelen. The scientist planned to wipe out his own people, but would leave himself a mate. The Doctor's companion Peri would be used in an experiment to replicate what had happened to him. The Bandrils would be provoked into destroying Karfel using weapons that would not affect the Morlox (or partial Morlox). The Doctor used a Kontron crystal to turn Megelen's aging weapon against him.
However, this turned out to be a clone, and Megelen attempted to abduct Peri. Having noted the lack of reflective surfaces in the citadel, the Doctor smashed a portrait of his earlier self to reveal a mirror hidden behind. Horrified by his own reflection, Megelen was overcome and was pushed into the Timelash. The Doctor speculated that he may have ended up in Loch Ness, and given rise to the legends of the Monster.