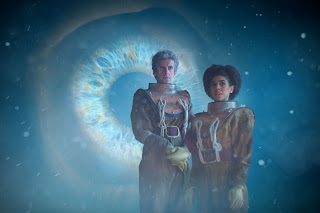 Last week's episode ended with the TARDIS failing to return to the Doctor's university rooms. Instead, the ship had materialised on the frozen Thames in 1814, during the last of the great Frost Fairs.
We're still in that phase of a new companion asking lots of questions, and the programme is still setting out its stall for all the new viewers who are supposed to have joined in the last three weeks. It's Bill's first foray into Earth history, and they are in a period when slavery is still a fact of life. Naturally, she expresses her concern - just as Martha had done when she was taken to London in 1599. Then, the subject was quickly brushed aside. The city was already a cosmopolitan place, and so she needn't worry. Looking at the visitors to the Frost Fair, Bill needn't have worried either, as there was much ethnic diversity on view. Racism was a running theme through the episode. The monster became a metaphor for slavery. Owned by a rich white member of the aristocracy, exploited and kept in chains. The villain - Lord Sutcliffe - was a racist, but this was simply one aspect of a general sociopathy. I don't think you would have found many members of the House of Lords in 1814 who didn't share similar views on race. 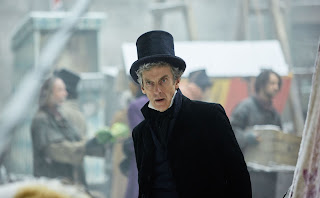 Sutcliffe was prepared to feed Londoners to his sea monster purely as a means of making money. The episode worked best when it was looking at the Doctor's ethics. As with Kill The Moon, the Doctor insisted that a human being take the decision as to what to do with the river beast. He claimed to act only on behalf of the human race, as their servant. Apart from the above named episode, this is far from consistent with what has gone before.
The actual scheme of Lord Sutcliffe didn't bear too close a scrutiny. He had his monster, which we are supposed to believe lay on the river bed of the Thames for centuries without anyone noticing it - even when the TARDIS scanner showed that it stretched from Westminster all the way past Greenwich. What did Sutcliffe's family actually do with the creature, before the coming of the Industrial Revolution? It's of use to him now, since its poo can be used as a highly efficient form of fuel, but prior to the family opening its steel works, of what possible use was it?
Sutcliffe's sudden decision to blow open the ice also failed to make much sense. The creature has lain hidden since before records began, so why do something that might draw attention to it. He acts when the Doctor and Bill turn up, thinking others may have found out about it. He doesn't wait to see if this is the case, and he keeps them alive instead of just bumping them off in the privacy of his own stately home.
And whilst I am in "things that don't make sense" mode, why does the Doctor not take the TARDIS to the river bed to check what's down there. Why use old diving suits when he has spacesuits in the ship? And where was the air coming from for those suits?
And if the angler fish hunt out food by sound, surely Stevie Wonder playing for River Song would have meant big trouble for the Eleventh Doctor... 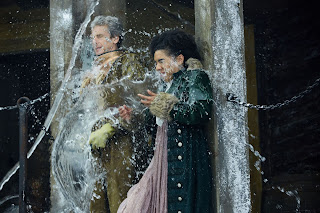 Yes, the actual plot this week was nonsensical, so best to just ignore, and concentrate on the plus points. It looked amazing. The sets were remarkable. The child actors were more than bearable. Some viewers will have been shocked that a child was killed early on in the piece. The Doctor usually saves children, but not poor Spider. Bill's reaction to his death reminded me strongly of Donna in Fires of Pompeii. Pearl Mackie showed that she can do more than just act goofy and ask annoying questions, which is mostly what she has been called upon to do up til now. I'm enjoying the Doctor / Bill relationship more than I did the Doctor / Clara one of the previous season.
The season story arc moved on a little. We now know that there is definitely someone in there, because they have started banging on the doors. The Doctor suddenly seems to be on the verge of reneging on his oath. Presumably this will impact on the latter episodes, as the Doctor's negligence leads to the events of the series finale.
Overall, another good episode, though again not a great episode. Were I to be giving these stories marks out of 10, we would be looking at 7's. We've got David Suchet next week, and a creepy old house, so I am expecting great things.
Posted by GerryD at 21:59