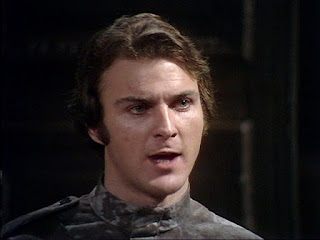 One of a trio of guerrilla fighters who travelled back in time from the 22nd Century to assassinate diplomat Sir Reginald Styles. A previous attempt by a lone killer had failed. Boaz arrived near Styles' home, with companions Anat and Shura, to complete the task. Styles was not in residence. Instead, the Doctor and Jo were in the house, expecting another attempt to be made. The guerrillas claimed that Styles was about to blow up a forthcoming peace conference. This would plunge the world into a series of wars which would leave the planet helpless when a Dalek invasion force arrived. These Daleks had time-travelled in order to re-invade the planet and alter history, after the original attempt had been foiled by the First Doctor. Boaz was very much a "shoot first, ask questions later" sort of man, and had to be kept in check by team leader Anat.
When a party of Ogrons attacked the house, Boaz and Anat returned to the 22nd Century, taking the Doctor with them. He wanted to retrieve Jo, who had accidentally been catapulted forward in time after handling one of the guerrillas' time machines.
Guerrilla leader Monia discovered that the Doctor had been captured by the Daleks, and that he was someone who had defeated them in the past. He organised a rescue mission. Boaz was killed in the raid, sacrificing himself to blow up a Dalek.
As this particular timeline was erased when the Doctor and Jo returned to the 20th Century, Boaz would have led a much different life, had he existed at all.

Played by: Scott Fredericks. Appearances: Day of the Daleks (1972).