B is for... Boneless 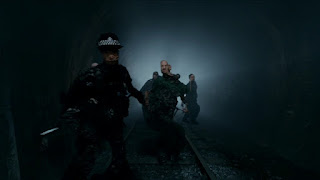 The name given by the Doctor to an obscure alien species which originated in a 2-dimensional universe. They attempted to cross over into our 3-D universe on a housing estate in Bristol. They began by killing some of the local inhabitants, reducing their bodies to two dimensions in order to study their anatomy. This process would leave flattened images of skin samples and maps of the central nervous system at the scene. Other victims were left looking like painted images on walls.
Their presence drew the TARDIS off course, and caused dimensional anomalies - reducing the exterior shell of the ship to a few inches in height, with the Doctor trapped on board.
Clara was left to join forces with a young graffiti artist named Rigsy, and his community service colleagues, to investigate further. 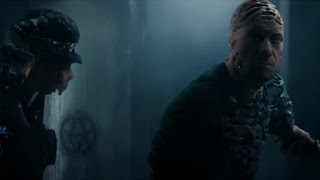 The Doctor attempted to communicate with the creatures using mathematics. Instead, they carried on killing - attempting to turn themselves into 3-dimensional simulacra of their victims. They had the power to convert 3-D objects into 2-D, and vice versa.
Clara used this against them - tricking them into returning the TARDIS to normal by hiding the miniaturised ship behind a painting of a door. The creatures attempted to make this 3-D in order to open it, but their energies passed through it to the TARDIS.
As the Boneless had failed to communicate or negotiate, and had carried on killing, the Doctor had no qualms in sending them back to their own dimension, even if they perished in the process.