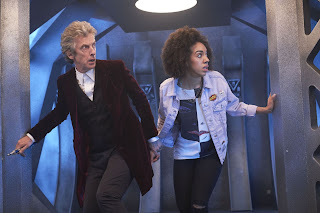 The new Radio Times was published today, covering the launch of Series 10. Steven Moffat gives his usual brief synopsis for each episode, and the final story titles are revealed. This year, all of the titles that were already attached to episodes 1 - 10 have been confirmed, with no changes.
Episode 11 is to be called World Enough And Time, whilst the finale is called The Doctor Falls.
That first one comes from a poem by Andrew Marvell - To His Coy Mistress. Apt, as it involves Missy. There's no mention of the return of John Simm's Master, so presumably this went to the publishers before the BBC were forced to announce his reappearance.
A few snippets of info about the episodes are included in the piece, though nothing really new for the first three (The Pilot, Smile and Thin Ice) which have already been previewed by the latest DWM.
The house in 10.4 - Knock Knock - is one which Bill and some friends are thinking of renting, and there is mention of a strange tower in the middle of the building which no-one can find a way into.
The space station in 10.5 - Oxygen - is called Chasm Forge, and all but four of the crew are dead. Problem is, the dead ones are still up and about.
10.6 - Extremis - sees the Doctor employed by the Vatican and involves a book in the Haereticum (one of the secret archives) called The Veritas, which leads people to kill themselves after reading it. Problem is, it has just been published on-line. Missy has been confirmed as appearing in this one.
Extremis leads into The Pyramid at the End of the World. A 5000 year old pyramid is found in the middle of a conflict zone (between America, Russia and China). Problem is, it wasn't there the day before. There's something about aliens who can't invade unless they get the consent of the human race.
The third of the interconnected episodes - The Lie of the Land - is about everyone in the world believing a deception, except for Bill, and even the Doctor has been fooled.
10.9 - Empress of Mars - features a human invasion of the Red Planet. Whose side should the Doctor take? One of the Ice Warriors - probably the Empress herself - is called Iraxxa. The invading humans hail from the Victorian era.
10.10 - The Eaters of Light - involves the disappearance of a Roman legion in the north of Scotland. A cairn on a hillside has a portal leading to the end of the world.
World Enough And Time sees the Doctor trapped on a huge spaceship on the edge of a black hole. Mention of the death of someone whom the Doctor was pledged to protect, which drives him to some rash actions. The quote for this episode is "My name's Doctor Who." As mentioned, Missy is back for this one and the finale.
The Doctor Falls simply states: "The Mondasian Cybermen are on the rise. It's time for the Doctor's final battle...".
Posted by GerryD at 21:12