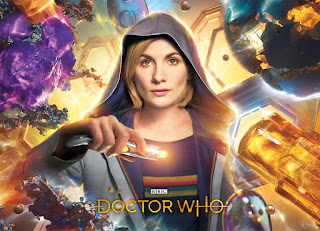 I've not said much about the forthcoming 11th Series of Doctor Who - mainly because there really hasn't been very much to say about it.
Today three of the principal cast, the show-runner and the executive producer attended the San Diego Comic-Con. Footage will no doubt follow shortly, but the BBC did take the opportunity of releasing the image you can see above, which features the new sonic screwdriver and gives a hint as to what the new TARDIS interior might look like. There are clearer images of the screwdriver, facsimiles of which go on sale in August. The design is very different from previous versions which were much more machine / tool like. The new one is clearly based on what is known as Tudric - the brand of Celtic Revival / Art Nouveau pewter-ware which was sold by Liberty & Co of London in the early part of the 20th Century. It has a much more organic look to it.
The Beeb also released a trailer featuring scenes from the new series, but it doesn't actually show a lot. Like the frankly underwhelming teaser shown during the World Cup Final, we only get to see the Doctor and the companions. I've seen images from the 2019 official calendar, which were accidentally released early on-line, then quickly taken down. Every month featured an image of either the Doctor, or one of the companions. I certainly won't be giving it wall-space, I'm afraid, as it looked downright boring. (Luckily every year we get a choice of two calendars - one for the most recent series, and one based around all of the Doctors. I'll be plumping for the latter again for 2019).
We have been promised a lot of new monsters for the new series, and that's what we really want to get a look at if the BBC want to get us excited about Series 11.
I've said all along that it will be the stories themselves that count - not the first female Doctor, or having Bradley Walsh as a companion, or what fancy lenses they have used on the cameras. Until we get some idea of what the adventures themselves are going to be like, the jury is still out as far as I'm concerned.
Posted by GerryD at 22:19