In which the Torchwood team are called to a warehouse outside Cardiff following reports of strange activity. Gwen is not with them, having slept in. As they explore, they find the building to be deserted - and then come upon a number of compact explosive devices. They detonate, and the team find themselves buried under rubble. Each of them experiences a flashback to the day they came to join Torchwood... 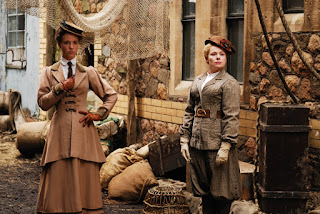 For Jack, things began at the end of the 19th Century. He encountered a young girl who read Tarot Cards, and she told him that the century would change twice before he met the Doctor again. Later, he was chasing an alien Blowfish when he was stabbed with a broken bottle. Dying and then coming back to life, he was confronted by two women - Alice and Emily. They shot the Blowfish dead then captured Jack, taking him back to the Hub where they tortured him for information concerning the Doctor. When it became clear that he did not know where he was, they then offered him a job. Over the next few decades he was employed by Torchwood Three as little more than an assassin, as the organisation existed simply to neutralise alien threats - not to comprehend them or befriend the benevolent visitors. On New Year's Eve, 1999, Jack entered the Hub where he found his colleagues dead. They had been killed by his boss, Alex. He had used an alien device which allowed him to see the future, and he claimed that everything would change with the 21st Century, and Torchwood were not ready to face the approaching threats. He then killed himself after handing the organisation over to Jack. He determined that Torchwood would change for the better under his leadership. For Tosh, things changed 5 years ago. She had been working for the Ministry of Defence and one night she stole the blueprints for a sonic manipulator device. She constructed one at her home. This was because her mother had been abducted by a terrorist group led by a woman named Milton, who were forcing her to provide them with the device. When Tosh went to hand it over and free her mother, the building was raided by UNIT soldiers. Tosh found herself incarcerated in a UNIT prison facility, with no hope of release. Jack visited her there and offered her a choice - stay forever in jail, or come work with him at Torchwood. He had been impressed by her building of the sonic device, as the blueprints had contained a flaw which she had spotted and corrected. 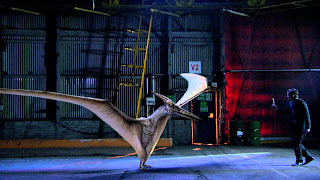 Ianto came to Cardiff after the Battle of Canary Wharf, as he had worked at Torchwood One. He wanted a new job and tried to get Jack to offer him one. He bribed him with coffee, and praised his dress sense, but Jack held firm - even after Ianto had helped him fend off a Weevil. When Jack went to a warehouse to capture a pterodactyl which had come through the Rift, he found Ianto there - having tracked the creature with his own rift detector. Ianto distracted it with chocolate whilst Jack caught the beast. Jack then relented and offered him a job. Ianto's persistence would later be revealed to have been because he wanted the resources to save his girlfriend Lisa, who had been partially transformed into a Cyberman. 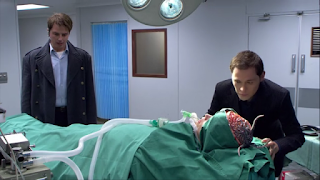 Owen is at risk of decapitation as a sheet of glass is balanced precariously over his throat. He recalls how he was about to get married when his fiancee, Katie, began to suffer memory problems. Fearing some sort of brain tumour, he had his hospital colleague investigate. On the day of her operation Owen was waiting outside the operating theatre when he heard a commotion from within. Entering, he found the entire medical team dead, poisoned by gas emitted from a tentacled parasitical alien which had lodged itself in Katie's brain. Jack appeared and told him what the creature was, and how Katie could not be saved. Jack then knocked Owen out, and when he awoke it was to discover that Torchwood had covered up the whole incident. Some time later, Owen was visiting Katie's grave when he was approached by Jack. He returned the punch. Jack then told him that he worked for an organisation which tackled alien threats such as the one which had killed Katie. Owen could bring his medical skills to the team, and help stop the same thing happening to others.
Gwen and Rhys arrive at the warehouse and manage to free everyone. Outside, the find that the SUV has been stolen. They discover who is behind the bomb trap when Jack receives a holographic message from Captain John Hart on his Vortex Manipulator. John has someone with him - Jack's long lost brother Gray... 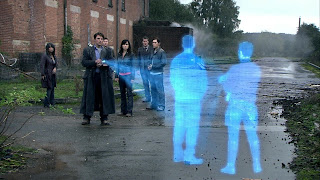 Fragments was written by Chris Chibnall, and was first broadcast on 21st March, 2008.
It forms the first section of the second series finale, though only the closing minutes make this explicit. As such it isn't really the first half of a two parter. What it does do is provide an origins story for most of the Torchwood team, in portmanteau fashion. We had already seen how Gwen came to join Torchwood at the start of the first season - so she isn't needed here. Eve Myles has been busy making the previous episode Adrift anyway. We knew some of Jack's backstory, as he had spoken of it to the Doctor and Martha Jones in Utopia. This episode shows the precise moment he comes into contact with Torchwood, and how they came to recruit him, and shows the kind of work he did with them. We also knew some of Ianto's story as well, as it had featured in the episode Cyberwoman. His flashback adds the origins for Myfanwy, the team's pet pterodactyl. The new stories are those for Tosh and Owen. There was some criticism from fans at the time of the way that UNIT was portrayed, being far removed from the organisation as it had existed when a certain Brigadier had been in charge. Owen's tale goes some way to explaining some of his attitudes to sexual relationships. His character seems to have changed the most due to his involvement with Torchwood, though not for the better. There has only been a very tenuous arc running through this second season - Jack's brother Gray having been mentioned in the first episode, and the circumstances of his abduction shown in the episode Adam. The Blowfish alien is seen again from that first episode, and Captain John returns - and now he has Gray with him, seemingly his prisoner. We also see the return of the Tarot-playing girl, who seems to have lived for a very long time, but there is still no clue as to her origins.
As the episode deals very much with Jack interacting with the other regulars, there is only a small guest cast. The two Torchwood ladies, Alice and Emily, are played by Amy Manson and Heather Craney respectively. Noriko Aida returns as Tosh's mother - having previously been seen in End of Days. Alex is Julian Lewis Jones, and Katie is Andrea Lowe, whilst Milton is Clare Clifford. Jones was seen recently as the King of Atlantis in the Justice League movie. Clifford had previously played the paleontologist Professor Kyle in Earthshock.
We get the first glimpse of Lachlan Nieboer as Gray, though he and James Marsters went uncredited on this episode. Overall, an interesting episode, comprising four short stories which range in mood from the bleakness of Tosh's to the humour of Ianto's. The conclusion nicely sets us up for the series finale, which promises the welcome return of Captain John.
Things you might like to know: