E is for... European Controller 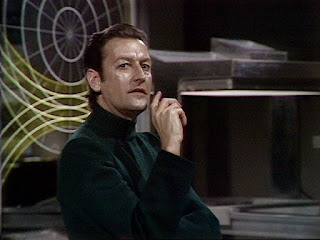 When the Daleks used time travel technology to change history and launch a successful invasion of the Earth in the 22nd Century, they employed human agents to govern the planet on their behalf. One of these was made Controller of the European Zone, and he was based in England. He came from a family of collaborators. One of their jobs was to ensure high productivity levels in the mines and factories where slave labour was employed. When members of a resistance unit stole a Dalek time travel machine in order to create their own, the Controller was tasked with tracking them down and destroying them. He argued with the Daleks about the best approach to take with these guerrilla fighters, preferring more subtle approaches to ensnaring them. When Jo Grant was accidentally transported to the 22nd Century, he kept the Daleks from interrogating her - deciding that she could be talked into helping by treating her like a guest. He convinced her that the guerrillas were bloodthirsty fanatics. When the Doctor arrived in the time zone to rescue her, the Controller attempted the same approach with him, but he was not going to be fooled so easily. After the Doctor was recaptured following an escape attempt, he insisted on trying the same approach again. However, the Doctor was able to convince him that he should have been using his talents to fight the Daleks rather than collaborate with them. He saved the Controller's life when guerrilla fighters broke in to rescue him. As the Doctor was about to travel back to the 20th Century to prevent this time-line from ever having existed, the Controller allowed him to evade capture, having taken on board what the Doctor had said. For his treason, the Daleks exterminated him - but he told them before he died that, in letting the Doctor escape, he had probably just helped destroy them.