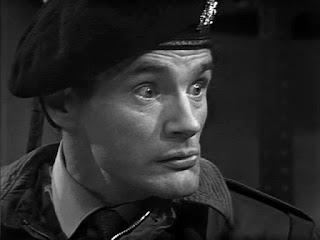 Private Evans was a rather cowardly Welshman who was part of the convoy bringing supplies and a new commander to the Goodge Street Fortress under central London. This was during the Yeti crisis, when a strange fog shrouded the city and Yeti began to appear in the tunnels of the Underground network. Driver Evans managed to escape when the convoy was attacked -by running away and hiding in the tunnels. The only other survivor was the Fortress' new commander - Colonel Lethbridge Stewart. Evans' untrustworthy ways led the Doctor and his companions to suspect that he might be the current host for the Great Intelligence, as various acts of sabotage struck the Fortress, and Evans disappeared into the tunnels on his own. This was merely an attempt to flee, however. Evans was present at Piccadilly Underground Station when the Doctor finally confronted the Intelligence, in the body of Staff Sergeant Arnold.