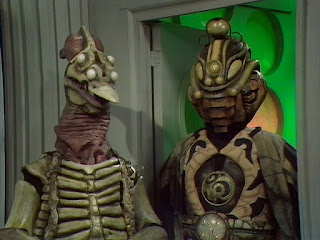 The Doctor described the Ergon as one of Omega's less successful experiments in psychosynthesis, resembling as it did a tall skeletal chicken. Like the Gellguards before it, the Ergon was created by Omega's will to act as a tool for him. It was armed with a matter converter weapon which was used to capture people who might be of use to the Time Lord, transferring them to his TARDIS and converting them to a stable state. It could also read minds for him, as when it identified Tegan as a former companion of the Doctor. The creature was destroyed when its own weapon was used against it.