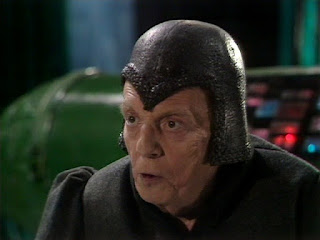 An elderly Time Lord, Coordinator Engin looked after the archives in the Capitol on Gallifrey. This brought him into contact with the head of security - Castellan Spandrell - when he had to check Time Lord data extracts such as that of the Doctor. The Doctor had just arrived on his home planet after receiving troubling visions of the assassination of the President of the High Council. Engin discovered that the Doctor's data extract had been read recently, though only members of the High Council were permitted access. He also discovered that no such extract existed for the Master.
In his office was an APC net connection to the Matrix - the repository for the minds of all dead Time Lords. The Doctor insisted that Engin link him to the APC so that he might find out the identity of the President's assassin -  a crime for which he was accused. Spandrell and Engin watched over him as he battled the assassin - Chancellor Goth - within the Matrix.
Later, Engin played the Doctor an extract from their ancient history concerning the Eye of Harmony, which alerted him to what the Master was planning.