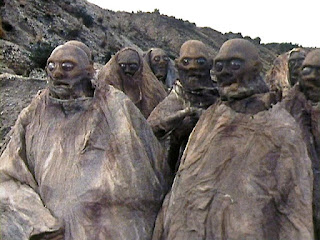 The inhabitants of the planet Exxilon had once been a technologically advanced race. They had travelled across the universe and visited many worlds, often bestowing some of their great knowledge on the native populations they encountered. The Doctor believed that it was they who had given the peoples of South and Central America the knowledge of how to construct their pyramids. The pinnacle of their achievements was the building of a huge city on Exxilon, which would act as a repository for all their wisdom. They gave it a brain of sorts, and a variety of defence mechanisms. It was powered by a massive beacon, which could draw energy to itself to feed its systems. However, the city developed an artificial intelligence which saw its creators as inferior to itself. It expelled them. Over the ensuing centuries, efforts to regain access to the city failed, and the Exxilons degenerated into a savage and superstitious state. They came to view the city as a deity, and offered sacrifices to it, declaring the region close to it sacred ground. Their High Priest became their leader, distinguishable by the red dye which stained his skin and robes. The Exxilons became hunters, leading a nocturnal existence, and wore cloaks which blended in to their rocky surroundings. Over time, some actually became petrified, as a result of their mineral rich diet. 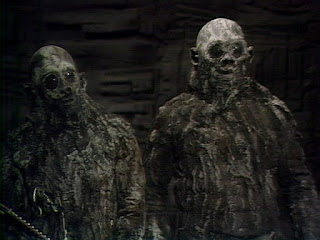 An off-shoot clan took to living underground, evolving a smaller stature and bio-luminescent skin. They refused to treat the city as a god, and were persecuted by the surface-dwelling majority.
The TARDIS became trapped on the planet when its power was drained by the city's beacon. Also stranded here was a military expedition from Earth, which had come to look for the mineral Parrinium, source of the only known cure for a terrible space plague. Sarah Jane Smith was captured by the Exxilons as she had wandered into the forbidden zone near the city, and was due to be sacrificed. A Dalek spaceship was next to become trapped on the planet, and they lost the use of their weapons due to the power draining beacon. The Exxilons destroyed one of the Daleks and captured the others, along with the Doctor and the Earth force. When the Doctor attempted to rescue Sarah, he was also sentenced to sacrifice - by being forced into a tunnel beneath the Exxilon temple where one of the city's defensive probes lurked.
He and Sarah were saved by Bellal, leader of the subterranean tribe. The Daleks adapted their weapons to fire bullets and so took over, forcing the humans and Exxilons to mine Parrinium for them. The Exxilons asked them for help in destroying Bellal's people.
The Doctor and Bellal broke into the city and sabotaged its computerised brain, just as the Daleks blew up the beacon. The city was destroyed. The Doctor claimed that it had been one of the 700 Wonders of the Universe.
Presumably the humans would have sought to make peace between Bellal's people and the other Exxilons once the city was gone and the Daleks had been destroyed.