E is for... Evangelista, Miss 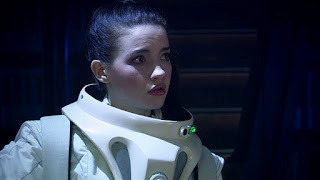 Miss Evangelista was the personal assistant to Strackman Lux, who financed the archaeological expedition to the Library planet. In charge of the expedition was Professor River Song. Miss Evangelista was belittled by her colleagues as they thought her rather dim. She was said to have mistaken the escape pod for the lavatory, ejecting herself into space. Twice. The Doctor's companion, Donna Noble, took pity on her and endeavoured to be kind to her. Her lowly status amongst the party meant that when she heard noises coming from an adjoining room, no one listened to her. She wandered in and was killed by the Vashta Nerada, voracious microscopic creatures which swarmed in shadows. Her consciousness survived for some minutes afterwards, thanks to a data chip which formed part of her spacesuit.
A short time later, Donna was uploaded to the Library's data core where she experienced a virtual reality life, wherein she got married and had children. She believed this life to be real. One night, she saw a woman dressed in black, her face covered by a veil, in the street outside, and a message was placed through her door asking her to come to the children's playground the next day. The woman in black told Donna that this reality was false - pointing out that her son and daughter were identical to the other children in the playground. Angered, Donna pulled away her veil to reveal Miss Evangelista. Her features were horribly distorted. 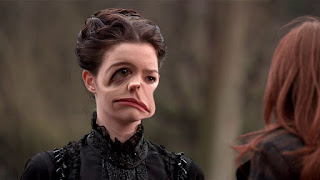 She too had been uploaded to the data core, but something had gone wrong. Her features had been warped, but she had gained an enhanced IQ.
All of the archaeological expedition were eventually uploaded to the Library data core, apart from Lux. They were reunited in the virtual world where they could expect to live for as long as the Library existed, and Miss Evangelista's features were repaired.

Played by: Talulah Riley. Appearances: Silence in the Library / Forest of the Dead (2008).