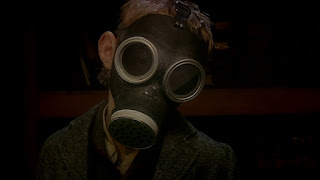 During the London Blitz an alien spacecraft crashed in the city's East End. A small boy named Jamie was out looking for his mother and was badly injured in the crash. The vessel was a Chula ambulance craft, full of Nanogenes which were programmed to repair Chula warriors so that they could resume fighting. Finding Jamie, they repaired his injuries, but did not have a human template to follow. They took the gas mask he was wearing to be part of his physiognomy. He was reanimated with great strength, but retained his desire to find his mother. Contact with him caused others to become like him - with gas mask faces and injuries to head, chest and a distinctive cut to the hand. All the staff and patients at the Albion Hospital, where the boy had been taken, were converted. The child began to pursue his sister Nancy, who helped look after orphaned children in the area. She would break into homes during air raids so they could eat what they could find there. The Doctor deduced that Nancy was really the boy's mother. Soon soldiers guarding the Chula vessel also began to be converted. The Doctor feared that the Nanogenes would not stop until the entire planet was converted. When Nancy admitted who she really was to the boy, the Nanogenes were given the correct template for humanity. Jamie, and all of the others who had been converted, were returned to normal - their various illnesses and injuries cured. Jamie and Nancy would be looked after by Dr. Constantine from the Hospital.

Played by: Albert Valentine. Voiced by: Noah Johnson. Appearances: The Empty Child / The Doctor Dances (2005).
Posted by GerryD at 22:33