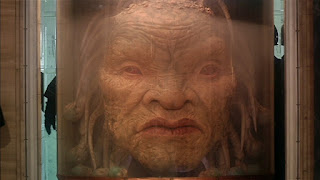 The Face of Boe appeared to be a huge head contained in a mobile smoke-filled tank. It was known throughout the cosmos, though its origins were obscure, and it was reputed to be thousands - if not millions - of years old. The Doctor had heard of it when he saw it on Platform One, which was in orbit around the Earth in the year 5 Billion. The Face of Boe had sponsored an event on the Platform - a gathering of influential figures to view the final destruction of the planet. The Platform was sabotaged by the Lady Cassandra, who claimed to be the last pure human. When her agents were discovered, she tried to blame the Face as it had brought everyone together here. The Face survived the sabotage.
Millions of years earlier, whilst he and Rose were visiting Satellite Five, the Doctor saw a news report claiming that the Face was pregnant - its child referred to as Boemina. 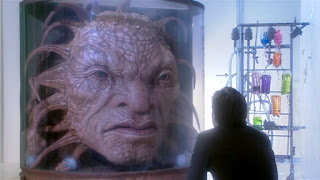 Some 23 years later, the Face fell ill and sent a message to the Doctor via his psychic paper to come and visit it at the hospital which overlooked New New York, on the planet New Earth. The face was being tended by Novice Hame, one of the cat-like Sisters of Plenitude who ran the facility. Hame told the Doctor of a legend surrounding the Face - that it had some great secret which it would only impart to someone like itself - a traveller who was the last of his kind. After the activities of the Sisters had been exposed, and Hame and her colleagues arrested, the Doctor went to see the Face of Boe. It told him that it was not ready to die quite yet, nor to impart its secret, and it would meet him again one last time. It then teleported away from the hospital. 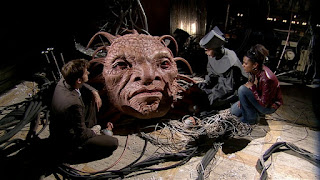 The Doctor took Martha Jones to the city a few decades later, where he discovered that a terrible virus had killed off the entire planet - save for thousands of people trapped in the underground motorway beneath the city. He was abducted from the motorway by Novice Hame and taken to the Senate Building, where he met the Face. Hame revealed that she had been tasked with looking after the Face as penance for her crimes at the hospital. When the virus had broken out, the Face had protected her by shrouding her in its smoke, and it had closed down the motorway in order to save the people trapped there. It was using the last of its power to keep the motorway running. The Doctor was able to open up the motorway and free the drivers, but the life support unit of the Face cracked open. As it died, it told the Doctor its great secret - telling him "You Are Not Alone". It later transpired that this was reference to the Master, who was hidden in human form at the end of the universe in the guise of Professor Yana.
The Master regenerated and stole the TARDIS, going back to the 21st Century to set himself up as the UK Prime Minister Harold Saxon. 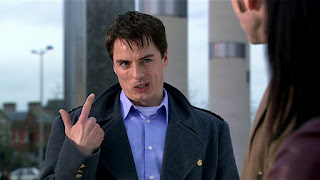 Captain Jack Harkness joined the Doctor and Martha in defeating him. When they dropped him off in Cardiff to rejoin his Torchwood colleagues, Jack mentioned that he was still growing old, despite being immortal, and wondered what would happen to him. He told them that as a boy he had been the first from his community on the Boeshane Peninsula to join the Time Agency. The Agency had made him their recruitment poster boy, and he had been called "The Face of Boe"...