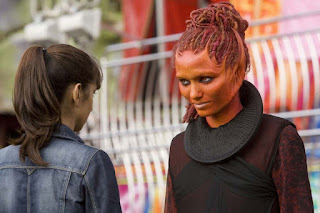 Sarah Jane Smith's young friend Rani was drawn to investigate reports of a "demon" which was haunting a fairground in a seaside resort. She was told about this by a friend named Sam, who now lived in an orphanage in the town. Rani decided to go and take a look on her own, having fallen out with her friends back in Ealing. She discovered that the demon was really a young female alien named Eve. Eve had been abducting homeless people and mentally enslaving them, making them ride on the fairground attractions. This was because she was really just a child, and wanted company. Her race had died out in a war, but she had been sent away in a sentient spaceship which crashed and was buried beneath the beach nearby. Eve's people could manipulate timelines, and when Rani said she wished her friends would go away and leave her alone, Eve took this literally. In an alternate timeline Rani then became a bitter old woman, living in the attic of Sarah Jane's house. A visit by a boy named Adam in 2059 allowed her to revisit the events at the funfair and change things back again.
Eve freed the people she had ensnared and set off into space to explore with two human companions - the fairground caretaker Harry, who had helped to protect her, and Rani's friend Sam.
It transpired that Adam, the boy from 2059, had been the son of Sam and Eve.