E is for... Enlightenment 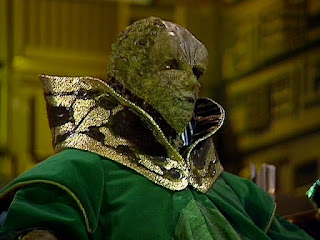 One of two Ministers who accompanied the Urbankan ruler Monarch on his mission to conquer the Earth, the other being Persuasion. Urbankans were green-skinned, toad-like creatures. At first they acted in friendly terms towards the Doctor and his companions, claiming that they wanted to live in peace with the humans. They asked Tegan to draw a sketch of contemporary fashions, as they wanted to know what the planet was like in the 1980's, having visited it several times in the distant past. A short time later Enlightenment and Persuasion appeared in the guest suite looking identical to the sketches - alerting the Doctor to the fact that they were really androids.
When the Doctor attempted a spacewalk to retrieve the TARDIS from orbit around the Urbankan spaceship, Enlightenment and her colleague tried to stop him. Both had their command circuits pulled out and thrown into space, permanently deactivating them. 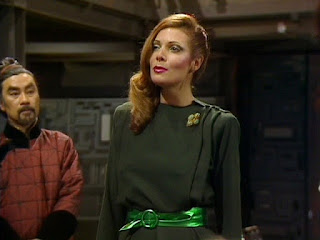