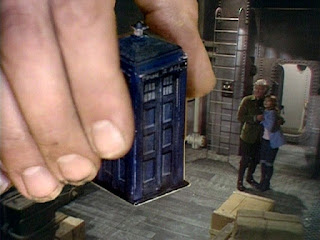 Carnival of Monsters was broadcast as the second story of Season 10, and the first adventure following the lifting of the Doctor's exile. However, the story was actually filmed immediately following The Time Monster at the end of the previous season. It marks the return to the programme of writer Robert Holmes, whose last contribution was Terror of the Autons. The director is Barry Letts, exercising his option to direct one story per season. He preferred four part stories, as he didn't really have the time to tackle anything longer.
Holmes submitted a story-line which he called "Peepshow", and the inspiration behind this was in part the series itself. Characters basically watch the Doctor's adventures on a TV screen, and Jo comments on how she cannot understand how people can get enjoyment from watching the Doctor and her being attacked and pursued by monsters. 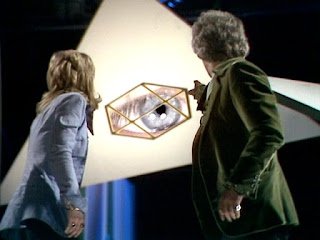 The showman Vorg, who owns the peepshow, can even direct the action. At one point he demonstrates a control which causes the inhabitants of the device to act in an aggressive manner - giving the Doctor a fight scene as though on demand.
The Doctor likens their situation by comparing it to children looking into a rock pool at the seaside.
Letts and Terrance Dicks didn't like the story title proposed by Holmes, so Dicks picked up on one of Vorg's lines of dialogue, when he described the Miniscope as displaying a "Carnival of Monsters". Holmes was not very happy about this, preferring his original title.
The story opens with the Doctor and Jo arriving in the hold of a cargo vessel. The Doctor had been hoping for Metebelis III - the first mention of this planet in the series, and which will prove to be of some significance for the remainder of the Third Doctor's tenure. Katy Manning provided the chicken sounds, in the scene where the Doctor lectured Jo on not judging by appearances. Rather than the dominant life-form on this planet, they are only chickens, and a nearby packing case has "Singapore" stenciled on it. They are on Earth. A quick explore reveals that they are on a ship in the middle of the Indian Ocean, in 1926.
At the same time that the Doctor and Jo are discovering their whereabouts, we cut to an alien planet where the showman Vorg and his assistant Shirna are also in the process of arriving.
At this stage, we have no idea what the link between the two set-ups might be, as Vorg has yet to explain just what his machine does. 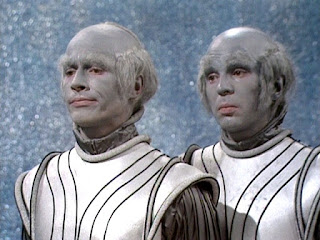 The Inter-Minorans thrive on bureaucracy - hence the decision to quite literally make them grey-faced. In contrast, the visitors wear brightly coloured costumes. They are Lurmans, and the dialogue states that they are neither human nor descendants of humans. Holmes introduces a new term for humans beings from Earth - Tellurians. This is basically Latin for "an inhabitant of Earth". Inter-Minor has been closed off for many years following a space plague, but President Zarb has decided it is time to open up the frontiers again. The Lurman entertainers might provide a distraction to keep the slave-like Functionaries distracted from civil disturbance.
Later, when the Doctor "arrives" on the planet, it might be expected that this oppression of an underclass might be just the sort of thing that he would normally object to, and do something about, but Holmes decides not to go there. One of the two junior members of the welcoming tribunal (Orum) even cracks a joke at the Functionaries' expense - an updating of the old snobbish class comment that if you gave poor people a bathtub, they'd store their coal in it. George Orwell mentions this in The Road to Wigan Pier (1937) but it was quoted by an MP in the House of Commons in a debate on housing in 1926.
Orum's colleague, but intellectual superior, is Kalik, brother of the never seen Zarb. This story marks the first appearance of the Robert Holmes Double Act - in this case we get two for the price of one. These pairings are often used to provide some comic relief, and to enable the villains, or allies, to discuss the plot without resort to exposition-dumping. Here we get Vorg and Shirna, and Kalik and Orum. Both provide some humour (especially the Lurman pairing). It is clear that Vorg thinks himself the smart one, when it is obviously Shirna who has the most sense. Orum is a little bit dim, and rather meekly follows the more belligerent Kalik. 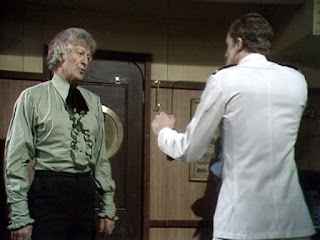 Meanwhile, back on the cargo ship, the Doctor has started to notice that things are not what they seem. There are shiny metal panels on the floors, which the crew can't see, and the passengers and crew they encounter repeat their actions every 20 minutes or so. This loop also involves an attack on the vessel by a prehistoric monster. They discover that they are on the SS Bernice, which the Doctor has heard of. It was involved in a famous maritime mystery - vanishing without trace in the middle of the Indian Ocean, on a flat calm sea, in 1926. The Doctor specifically compares this incident to the mystery of the Mary Celeste. I shan't repeat myself here - go back and look at the 'Inspirations' post for The Chase. The Special Edition DVD for this story actually has a whole extra feature on maritime mysteries, inevitably mentioning the Mary Celeste and the Bermuda Triangle. Strangely, considering they only encountered them a short time ago, the Doctor fails to enlighten Jo about what really happened to the crew of that ill-fated ship when the Daleks paid it a visit.
The Doctor and Jo soon manage to break through one of those strange floor plates, and find themselves inside the gubbins of some technologically advanced piece of machinery.
At this point we should mention the belief common to most small children that the people they see on their TV screen really live inside the television set. 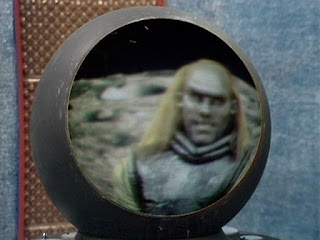 Back on Inter-Minor, Vorg has finally got round to telling the tribunal about his Miniscope - just as the Doctor and Jo are realising that they are inside just such a device. And so the two seemingly separate plots mesh together. Threats against Vorg and Shirna and their machine are also threats against the Doctor and Jo. The Doctor and Jo break into another circuit, and find themselves in the middle of a marsh. This is the domain of huge serpentine monsters called Drashigs. I'm sure you already know that the name is an anagram of dishrags, as Holmes expected the VFX gang to come up with something cheap to realise them.
The marshy location was right next to where the ship was moored, along the Thames Estuary. Careful filming made it look like the ship was sailing along - but this was just the tide going by. The ship was due to be scrapped, and the DVD's making-of documentary recounts the story of how Jon Pertwee helped himself to a rather nice binnacle from the bridge, reasoning that the vessel was to be broken up anyway. However, many of the fixtures and fittings had been catalogued as they were to be sold off, so Barry Letts had to talk his star into returning it. This is just one example of Pertwee's appropriation of supposedly unwanted items from filming locations. Making his very first story, at the house used for the cottage hospital, he found an antique writing desk in the attic and got the production team to help him winch it out the window. 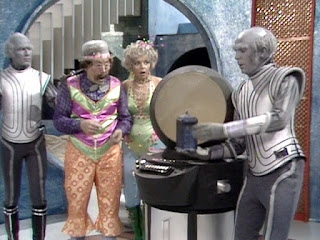 Whilst Jo finds herself back on the ship, the Doctor makes it to the outside world where he grows to normal size. Kalik and Orum, meanwhile, have come up with a cunning plan. Discovering that the Drashigs have broken out of their circuit and are loose inside the Miniscope, they will let them escape from the machine. The resulting chaos and destruction will discredit Kalik's brother, and naturally he would make a much better President. The plan, when you think about it, isn't all that cunning. They've sabotaged their only weapon - planting a key component amongst Vorg's belongings so he will get the blame. They are then gong to be hanging around when the monsters emerge. They even give the creatures a little help in breaking out. Vorg ends up hoist on his own petard - eaten by one of the Drashigs. Rather than get the blame for the sabotage of the weapon, Vorg finds the component and makes a hero of himself by shooting down the Drashigs and saving the day. The Doctor uses the TARDIS to rescue Jo, and then to send all of the exhibits within the machine back to their rightful places in space and time before it blows up.
One thing left hanging, which I talked about when I reviewed this story, is how the Doctor knew about the ship's disappearance if he put it back where it belonged. Did history change, or did the ship then encounter another disaster after being returned?
Discussing the Miniscope earlier with Vorg and tribunal chairman Pletrac, the Doctor gives away a little bit about his time whilst still resident on Gallifrey. He claims that he helped get the machines banned, after complaining about them to the High Council - pretty much making a nuisance of himself until they agreed. You'll recall that this story was recorded immediately following one in which he described his boyhood encounter with an ancient Gallifreyan mystic, so he's getting quite chatty about his background these days.
Vorg and Shirna are left on the planet without a livelihood, but fortunately Vorg discovers that at least some of the Inter-Minorans have a predilection for gambling. The game he plays is a variation on Three-card Monte - or Find the Lady. Three cards are placed face down, one of which is a face card (traditionally the Queen of Hearts). The cards are shuffled and you then have to pick the face card. It is a common confidence trick, originating in Spain, which dupes the gullible to this day. 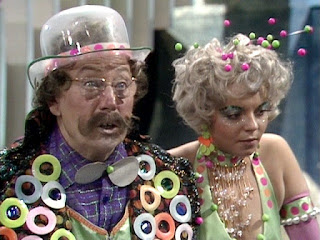 When we looked at the very first story in these 'Inspirations' posts, we mentioned Kenneth Williams -  in reference to the schoolboy in the opening scenes. He and Hugh Paddick created a couple of characters called Julian and Sandy for the radio show Round the Horne. Blatantly gay (though one end of series episode had them introduce their wives to Kenneth Horne), they brought the language of Polari to the masses. Also known as Palare, this originated in the Romany community but was picked up by other groups, such as gay men, for use as a form of secret language. It mixed Italian, Yiddish, rhyming slang and backslang. The latter means words being reversed - such as riah for hair. It was popular among travelling fairground workers, many of whom were of Romany stock, as Vorg mentions to Shirna. Strangely, it does not appear to be translatable by the TARDIS, as the Doctor can't understand Vorg when he uses it on him. Vorg says: "Parlae the Carny?" - "Do you speak the Carnival language?", "Varda the Bona Palone" - "Look at the pretty girl", and "Niente dinari here, y'jills" - "No money to be made here. you know".
Right, I'm off to get me lills on some jarry. Next time: the real Tenth Anniversary adventure gets under way. The Doctor and Jo end up on another cargo ship - this time in space. Someone's trying to provoke a war (it's you know who), and this time he's working for them (you know who too)...
Posted by GerryD at 22:37