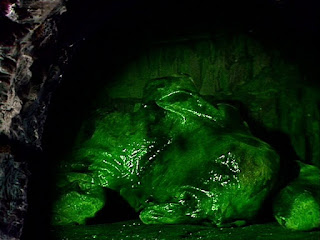 An ambassador from the long-lived Tythonian race, who was sent to the planet Chloris to set up a trade agreement. Tythonians thrived on chlorophyll, of which the densely-jungled Chloris had an abundance. In return they offered metals, which the planet lacked. However, Erato had the misfortune to encounter the Lady Adrasta, who was determined to keep her position of power through her monopoly of the scarce metal stocks. She tricked the ambassador into entering the mines, where she sealed the creature in. Erato could only communicate using a special shield-like device which allowed it to speak through someone else's larynx. Adrasta retained this and kept it in her palace. Attempts to communicate with others led to their being accidentally crushed to death by its great bulk. Adrasta would execute her enemies by casting them into the mine workings. Unbeknownst to Adrasta and her court, Erato had sent off a distress signal when first captured, and its people had responded by diverting a neutron star to destroy Chloris. After the Doctor had freed the creature, Erato was prepared to flee the planet in its reconstituted egg-like spaceship without alerting the people of Chloris. The Doctor forced it to tell them of what it had done, and then it and the Doctor set about neutralising the star. The Doctor used the TARDIS tractor beam to slow the body, whilst Erato used its ship to spin a shell of aluminium around it.
Erato then set up a trade agreement with the planet's new rulers.