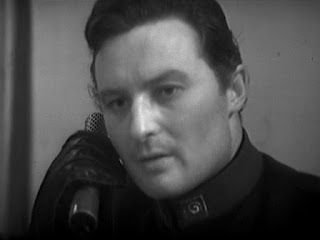 Chief Prosecutor of the city of Millennius, on the planet Marinus. This was the location of the fifth and final key needed by the scientist Arbitan to operate the Conscience Machine, whose power radiated across the planet to suppress evil actions and intent. When Ian Chesterton arrived in the city he found himself in the museum vault where the key was displayed, but he discovered a dead man lying there. Someone knocked him out and stole the key, and he awoke to find himself accused of the murder and theft. He was horrified to learn that the legal system in Millennius held that people were guilty until proven innocent. The Doctor elected to act as Ian's defence counsel, whilst the city appointed Eyesen to prosecute. Unbeknownst to Ian and the Doctor, Eyesen was the mastermind behind the theft of the key. He and his accomplices - a museum guard named Aydan and his wife Kala - hoped to ransom the key for a great deal of money. Aydan had killed the man in the vault - really one of Arbitan's followers - and framed Ian for the murder. When it looked as though Aydan might lose his nerve and reveal the truth, Eyesen and Kala had him killed, as they were having an affair and regarded him as disposable. Eyesen then ordered Kala to abduct Susan to deter the Doctor from investigating further - telling Kala that she should kill the girl as she could identify her.
The Doctor was able to work out the hiding place of the key - in a secret compartment in the murder weapon itself - but he needed to catch the mastermind red-handed when he came to collect it from the guardroom. After successfully prosecuting Ian, Eyesen sneaked into the guardroom that night - only to fall into the Doctor's trap.
Ian was freed, and presumably Eyesen was then put on trial and himself sentenced to death.

Played by: Donald Pickering. Appearances: The Keys of Marinus (1964).