E is for... Emperor Dalek 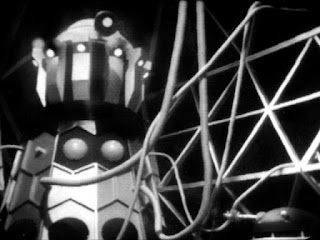 The first Dalek Emperor encountered by the Doctor was based on their home planet of Skaro. It was huge and immobile, a number of pipes and cables running from its body linking it to the Dalek city. It was protected by a retinue of Dalek guards which were identified by distinctive black domes. The Doctor had never met it before, and had only ever surmised that such a Dalek existed. The Emperor had sent a squad of Daleks to 19th Century Earth to set a trap for the Doctor, luring him from the 20th Century after stealing the TARDIS. The Doctor was tasked with isolating the Human Factor - the set of attributes and emotions which had so often led to Dalek defeats in the past. This was also a ruse, however, as what the Emperor really wanted was the Dalek Factor, which could turn anyone mentally into a Dalek. The process failed to work on the Doctor, as he was not human, and he reversed things so that more of the Daleks were given the Human Factor. This led to a civil war breaking out on Skaro, during which the Emperor was apparently destroyed. 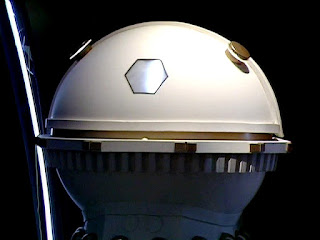 The Daleks dispensed with an Emperor after this, being led by a Supreme Council instead. However, when their creator Davros was brought to Skaro as a captive, to stand trial for crimes against his creations, he managed to gain control and set himself up as their new Emperor. He transferred what was left of his body into a new white casing, with a domed upper section. This could be opened up to reveal Davros within. The new Emperor sent a mission back through time to seize the Hand of Omega - a Gallifreyan stellar manipulator. This device had helped give the Time Lords their mastery over time travel, and Davros felt that he could use it to achieve the same for the Daleks. The Doctor forced the Emperor to activate it without proper safeguards. It flew into Skaro's sun and blew it up, destroying the Dalek planet. Davros fled in an escape capsule before feedback destroyed his command ship. 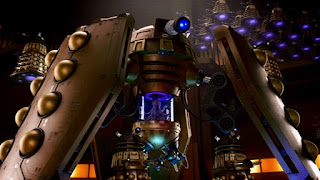 During the Last Time War, the Daleks were once again led by an Emperor. Once more this was a huge version of a Dalek casing which was immobile, but located on the lead Dalek spaceship. Again, the Emperor was protected by black domed Dalek guards. It is not clear if this was a new Emperor, or if the one previously encountered by the Second Doctor on Skaro had been resurrected. After its ship had been attacked and apparently destroyed, the Emperor had hidden itself away on the edge of the galaxy, where it began to build a new army. This was made from the bodies of humans. It also installed the Jagrafess on Satellite Five to manipulate the human race and pervert history. The centuries of isolation drove the Emperor insane, and it came to believe it was a god. Once its army was established, the Emperor launched an attack on the Earth in the year 200,100 AD. The Doctor sent his companion Rose Tyler back to the 21st Century to save her but she broke into the heart of the TARDIS in order to return - absorbing the Time Vortex into herself. With her new powers, she removed the Emperor and its army from existence.