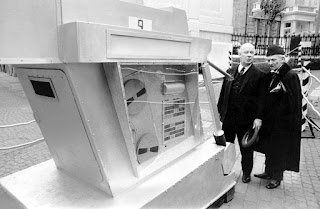 The first time that the same writer has authored two consecutive stories, The War Machines is written by Ian Stuart Black. Producer Innes Lloyd and his story editor Gerry Davis have decided to introduce a pair of very contemporary young companions, and so a present day Earth setting is required - which also allows Dodo to be left back where, and when, she started. It can only be set in Swinging London.
Both Lloyd and Davis want to see some real science in the show, and so Davis has been sounding out some real scientists to provide it. In short, they are after a scientific adviser.
One of the first to be approached is Patrick Moore, the TV astronomer who presents The Sky At Night programme. He turns them down, though he will get a cameo decades later in Matt Smith's debut episode. Eventually Davis speaks with Christopher Magnus Howard Pedler - better known as Kit. He was an ophthalmologist, who had made a few appearances on TV, including Horizon and the popular Tomorrow's World.
He has some ideas, and so decides to take up the role. 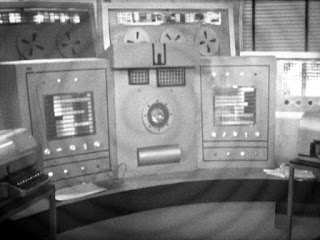 As a medical man, Pedler wanted to do something about the dehumanising consequences of spare part surgery, but that would have to wait a little while longer. He and Davis then hit upon the fear that people had about computers taking over people's lives and putting us all out of a job. Of particular concern was the notion of computers making decisions without any human checks and balances. They came up with the preposterous idea that computers might be able to communicate over telephone lines...
Davis started to formulate a story idea called "Dr Who and the Computers", and the first writer it was offered to was Pat Dunlop. He had to drop out due to commitments elsewhere, and that's when Black became involved. He claimed in an interview that he was unaware of Dunlop's involvement, and that he wrote his treatment from scratch.
For a backdrop to the story, tying in with the computer being linked to the phone network, Black chose to set it in the recently opened General Post Office Tower. Built between 1961 - 64, it was officially opened in May 1966. Despite dominating the London skyline, it officially didn't exist until an MP gave its address in Parliament in 1993.
Now, since the opening episode in November 1963, only one Doctor Who story had been set in the present day, and that had seen the time-travelers shrunk to one inch in height and confined to a back garden and its shed. There had been brief visits to contemporary Earth, usually as part of Dalek chase sequences, plus the coda to The Massacre on Wimbledon Common where Dodo came on board the TARDIS. 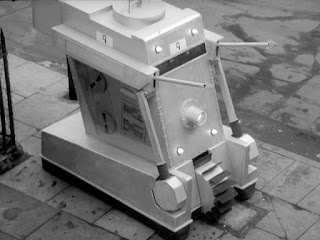 Two obvious influences on The War Machines are a pair of earlier popular science fiction series from the BBC. The Doctor allies himself with an authority figure and then the army get involved, as we had seen with the Quatermass serials of the 1950's. In his previous story, Black had cut to the chase by having the Elders know all about the Doctor, and he had knowledge about the era they lived in. Here, the Doctor wanders into the GPO Tower and gets to see WOTAN like he was part of London's scientific elite, and then gets put up at Sir Charles' home. Either Black thinks the Doctor is as famous as his TV Comic alter-ego, who appears on TV shows, or he just doesn't want to mess about with lengthy introductions. The War Machines sees the Doctor working alongside the military for the very first time, and we have seen Prof Quatermass forced to rely on them in the first and third of his outings. There are a number of British made Science Fiction movies of this period, all inspired by Quatermass, wherein a scientist is allied with the military - such as Robert Holmes' Invasion, and The Night Caller.
In A for Andromeda and its sequel, aliens transmit the plans for a computer, which a group of scientists have to create. The idea for the Andromeda serials came from another astronomer - Fred Hoyle. No doubt Davis had tried to recruit him as well.
Black named his computer WOTAN - Will Operating Thought ANalogue. This derives from Norse mythology, Wotan (or Odin) being the principal Norse god. The War Machines were at one point to be called Valkyries - also from Norse mythology. The Valkyries determined who was to die in battle, with half of those killed going to Wotan's Valhalla, and the other half to Freyja's Folkvangr. Usually portrayed as warrior women, they were the lovers and servants of the dead warrior heroes. 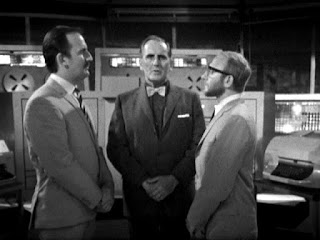 Computers have a very long history, from the most basic counting stick to the Antikythera mechanism, which dates to around 100 BC, amongst the more distant ancestors. The "father of the computer" was Charles Babbage, who designed and built the Analytic Engine in the first half of the 19th Century. Computer development really forged ahead with the Second World War, and the need to target weapons efficiently and to break German codes. A Post Office engineer named Tommy Flowers worked on systems to improve telephone exchanges in the 1930''s, and he was called in to Bletchley Park to design Colossus - the world's first electronic digital computing programmable machine. Working at Bletchley was Alan Turing, who had theorised what we now know as the modern computer in a paper published in 1936. In the States, there was also ENIAC (Electronic Numerical Integrator And Computer), designed primarily for weapons targeting, and faster than Colossus.
The internet would have to wait until Tim Berners-Lee, and his invention of the World Wide Web in 1989. 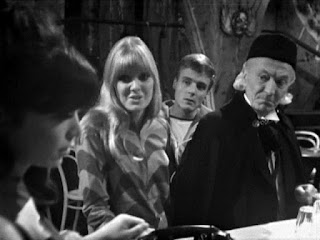 As for the contemporary trappings of this story, Covent Garden was host to a number of late night clubs and drinking dens like the Inferno Club. Kitty mentions the Doctor looking like "that DJ" - a reference to Jimmy Saville. The new couple - Ben and Polly - aren't based on anyone in particular, but they are clearly inspired by people like Terence Stamp and Julie Christie - the duo name-checked in The Kinks' Waterloo Sunset. Ben also has a touch of the Michael Caine about him. There are a couple of publicity photos of the pair that look like they could have been taken by David Bailey. Polly is posh and a career girl, who looks like she would be at very much at home on the King's Road, whilst Ben is a Cockney (only a few months after they had trouble with Dodo's regional accent). He's a sailor, so can bring the necessary skill set for a companion to an older Doctor. He's punching someone within seconds of us first meeting him. Lloyd and Davis are so keen to get on with establishing their new companions, poor Dodo gets unceremoniously dumped half way through the story, not even being allowed to turn up for a goodbye scene at the conclusion.
Next time, we're back into History. Shiver me timbers, it's a right Syn-ful mix of smugglers and pirates. Ahrr!
Posted by GerryD at 22:49