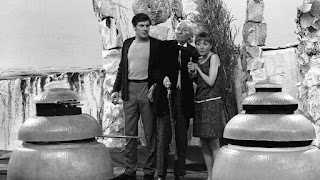 Squat robot servants to the Rills. They had domed, segmented bodies which could collapse on top of each other for protection. A small antenna protruded from the top when they wanted to transmit signals. They were armed with rod-like weapons that spat flames. The Rills do not appear to have given these robots a name, but "Chumblies" was coined by the Doctor's companion Vicki from the way they moved. The Rills had no vocal chords and so could not speak, but could communicate by analysing Vicki's speech and transmitting their thoughts verbally through the robots.
The Doctor and his companions encountered them on a planet that was about to explode. Also present were the female Drahvins. The Rills wanted to help them escape the planet, but their leader Maaga suspected they wanted to kill them, and refused to allow her soldiers to listen to what the Chumblies were transmitting. The robots were impervious to Drahvin weapons, but could be disabled by a magnetic steel mesh when it was thrown over them. One was destroyed when it was struck with a metal bar. The Doctor helped the Rills escape the planet before its destruction - one of the robots being left behind to help the Doctor and his companions reach the safety of the TARDIS.