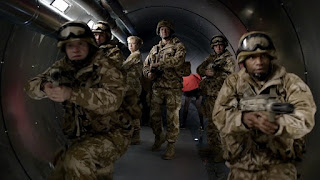 By the 51st Century, the Catholic Church had a military branch known as the Clerics. Their badge was an inverted Greek letter Omega, and they came under the command of the Papal Mainframe.
The Doctor first encountered them on the planet Alfava Metraxis, when they were brought in by River Song. She had been released from the Stormcage prison facility so that she could recruit the Doctor to help capture a Weeping Angel. In command was Father Octavian. The Angel was on a spaceship called the Byzantium which crashed on the planet. The Clerics joined the Doctor, River and Amy in penetrating a Maze of the Dead, housing the remains of the native Aplan people who had died out centuries ago. However, it transpired that the statues covering the Maze were really other Angels, in a decrepit state but being re-energised by the radiation from the crashed ship. One of the Clerics - Bob - was killed and his vocal chords were used by the Angels to communicate with the Doctor. Once in the ship's artificial oxygen-producing forest, other Clerics tasked with guarding Amy were lured away by the appearance of the mysterious crack in time which had first been seen in Amy's bedroom. They were removed from time, as though they had never existed. Father Octavian was later killed by an Angel. Once the mission was over, the Clerics returned River to Stormcage. 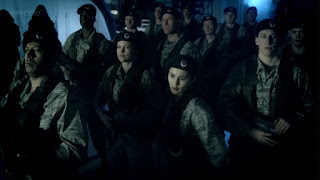 A breakaway group from the Church, under the leadership of Madam Kovarian, abducted the pregnant Amy and held her captive on the asteroid Demons Run, which had been hollowed out to form a military base. The Clerics were commanded by Colonel Manton. They were working with the Headless Monks, and some of the Clerics were recruited to the join the Monks. They trained themselves to be resistant to Psychic Paper. The Doctor and Rory formed a band of friends to come and rescue Amy. The Doctor sowed dissent between the Clerics and the Monks so that they started to fight amongst themselves, allowing him and his friends to start their attack. Manton was discredited, and the Clerics were captured by Silurian and Judoon forces and thrown off the asteroid. One of them - a young woman named Lorna Bucket - joined forces with the Doctor and his friends, but was killed when the Monks sprang a counter-attack. 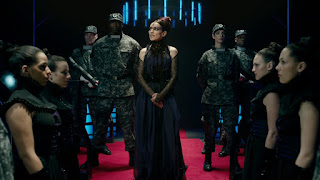 The Doctor visited the planet of Trenzalore for the second time, after a signal started to be beamed from there across the entire universe. This attracted the attention of numerous alien races and soon a massive collection of spaceships was in orbit. One of these housed the Papal Mainframe. The Doctor and Clara visited it and met its leader - Tasha Lem. On board was an army of Clerics. Appearing uniformed, they were actually naked - as everyone had to be on the craft - though they did employ holographic clothing. The Church placed a forcefield around the planet to prevent any of the aliens getting down to the town of Christmas where the Doctor had based himself, and from where the signal originated. The Daleks finally defeated all the other races and invaded the Mainframe, turning everyone into their drones.