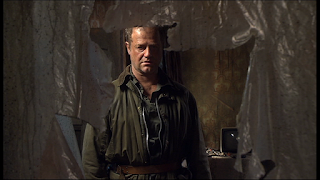 In which the Torchwood team investigate a series of disappearances in the Brecon Beacons district. Jack is worried that the Rift might be spreading. 17 persons have gone missing, and they use the last known mobile phone signal to begin their inquiries. They set up a camp. Owen admits that he and Gwen have kissed recently. She is furious with him for revealing this. The pair go off to gather wood and spot a couple of figures lurking in the forest. They give chase, and come upon a corpse which has been stripped of flesh. As they examine it, they hear their SUV been driven off. They give chase on foot, and soon come to a terrace of buildings in a remote valley. These appear to be deserted. Two further corpses in a similar state are found. On entering one of the buildings Gwen is shot by a terrified young man named Kieran. 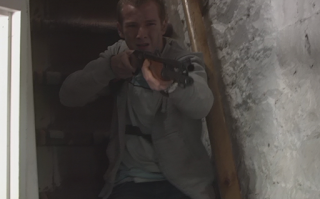 She is taken to the pub where Owen patches her up. Kieran explains that he has been hunted by someone in the village. Jack begins to wonder if this is really the work of aliens from the Rift as they initially suspected. The pub comes under attack, and Kieran is abducted. Jack shoots and wounds a man named Martin. Gwen and Owen go looking for Kieran and meet a police officer named Huw. He says that he has come to the village for a community meeting, and indicates a lit-up building in the woods. Tosh and Ianto go in search of the SUV. In one of the houses they find a fridge full of body parts, and a pile of clothes. They are captured by a woman named Helen, who claims they are to take part in the "Harvest" - something which takes place every 10 years. Tosh has guessed that the people of this village are cannibals. 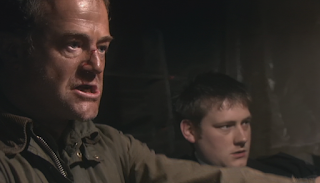 Tosh and Ianto are taken to the building in the woods and meet the village leader, Helen's husband Evan Sherman. Ianto tries to escape as Gwen and Owen arrive with the policeman. Evan seems unconcerned, as it turns out that Huw is his nephew and is one of the cannibals. Ianto is about to have his throat cut when Jack bursts in, driving a tractor. He had learned all about the village after interrogating Martin. Huw and Evan are shot and wounded. The police are summoned and take the entire village into custody. When interrogated, Evan can give no reason for their behaviour - save that it made him happy. Back in Cardiff, Gwen and Owen begin a relationship, as she feels he is the only person she can speak to about what they do. 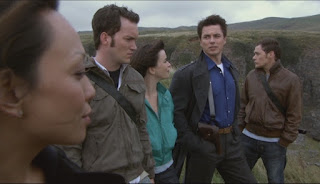 Countrycide was written by Chris Chibnall, and was first broadcast on 19th November, 2006. The tile is obviously a pun on 'countryside', the suffix -cide implying murder.
It's the first episode that takes place entirely away from Cardiff and the Hub, and for once the Rift has nothing to do with events. These are purely human monsters.
The biggest problem is that this is all so derivative of any number of in-bred-yokels-kill-and-eat-townies movies. The Texas Chainsaw Massacre is just the most obvious example, and we have also had a whole slew of Wrong Turn films. The Torchwood crew are thoroughly Metropolitan, and right from the start they are complaining about the countryside and having to camp out. The villagers are walking stereotypes, with little or no characterisation. Having the policeman revealed as one of the villains is unoriginal as well.
Gwen gets shot at close range with a shotgun, but makes a remarkable recovery. Boyfriend Rhys might be a bit of a boor, but he's likable where Owen isn't, so the pair having an affair actually serves to make you lose sympathy with her. Tosh, meanwhile, lets slip her own infatuation with Owen - so that's two women we can't understand fancying him.
The main guest is Owen Teale, playing Evan. One of his earliest TV roles was as guard Maldak in Vengeance on Varos. Helen is Maxine Evans, Kieran is Calum Callaghan, and Huw is Rhys op Trefor. 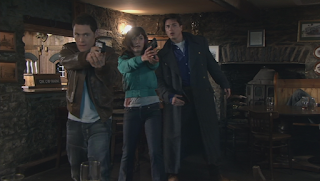 Overall, an episode that seems to be designed just to demonstrate that this is post-watershed stuff, and they can push the gore and violence as far as they want. Just a pity they had to resort to stereotypes and ripping off horror movies to do it. One good thing is that it was right to remind viewers that not all monsters come from outer space - even if they're the ones we prefer to see if we tune into a Doctor Who spin-off show...
Things you might like to know: