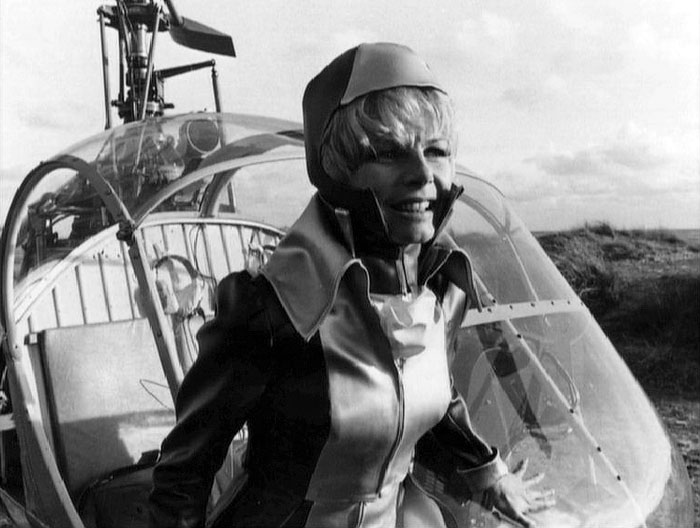 In which the TARDIS materialises on an Australian beach, sometime in the near future. The Doctor and his companions are having a look around when they are suddenly attacked by a group of men in a hovercraft. They are rescued by a young woman named Astrid Ferrier, and flown to safety in her helicopter. She takes them to her nearby beach house, where she makes it obvious she does not like the Doctor for some reason. She only rescued them under orders. The men in the hovercraft attack once more, but they escape and travel to the office of her employer - Giles Kent. Here, the Doctor learns that he has a double in a man named Salamander, who many see as a saviour of mankind. He created the Suncatcher satellite energy system - which enables sunlight to be focussed on regions of the Earth to aid multiple harvests. Kent has other opinions of the man - claiming he is behind a series of recent natural disasters, and of harbouring designs on world domination. Astrid blames Salamander for her father's death - hence her initial dislike of the Doctor - who she thought was the would-be dictator. Head of World Zones Security, Donald Bruce, visits Kent unannounced. The Doctor pretends to be Salamander - fooling Bruce. In this time, the world is split into large economical and political zones. The Doctor refuses to heed Kent's warnings against Salamander until he has some proof. 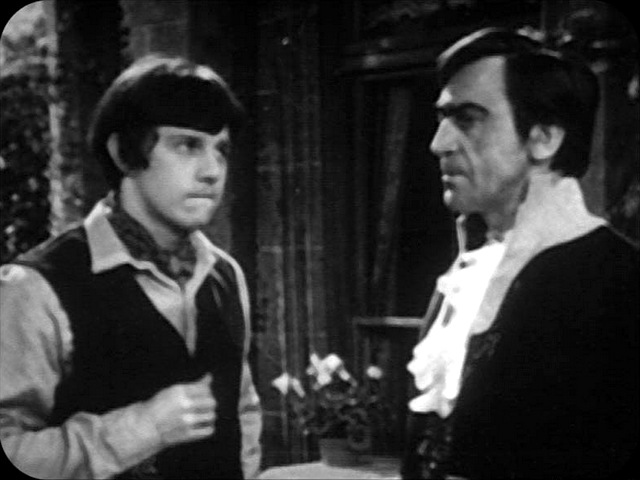 In order to gather evidence, Astrid helps with a ploy to get Jamie and Victoria into Salamander's inner retinue. They will travel to the Central European Zone - controlled by a man named Denes - but are observed in a park by Bruce. Salamander is in this Zone to discredit Denes and replace him with one of his own men - Fedorin. The Doctor and Kent remain behind in Australia in order to observe the activities surrounding Salamander's research base at Kenowa. They are continually harassed by Salamander's personal security man, Benik, though the Doctor manages to keep out of sight. A faked assassination attempt upon Salamander allows Jamie and Victoria access to his retinue. Jamie is made a security guard, whilst Victoria will help out in the kitchens. Denes is arrested, and an attempt to rescue him fails. He is killed. As Fedorin had earlier failed to poison Denes, he is also killed. Bruce reveals to Salamander that he has a double somewhere, and that Jamie and Victoria were observed with Astrid - who is known to work with Kent, who used to be a colleague of Salamander until he was ousted and discredited. They are captured, and everyone travels back to Australia. 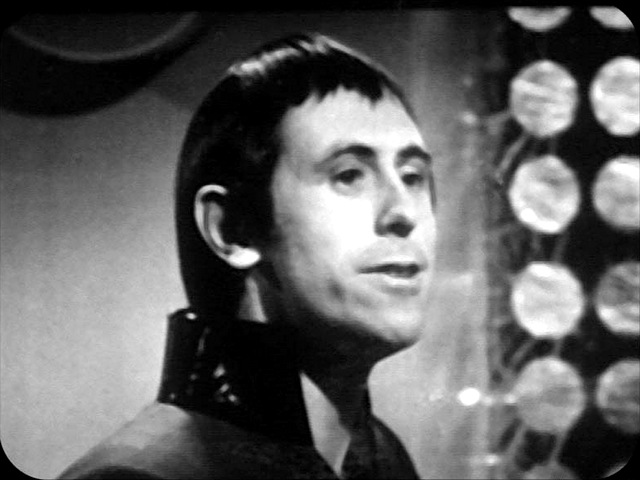 It transpires that deep beneath Kenowa is a secret base where a group of people think they are survivors of a nuclear war. They have been using the Suncatcher to trigger earthquakes and volcanic eruptions against an enemy which doesn't exist - thanks to Salamander's lies. During one of his visits with food, the group's leader, Swann, learns that things on the surface are not as Salamander says when he finds a scrap of newspaper. He insists on visiting the surface - and Salamander shoots him once away from the others. Astrid finds a way down to the base and tells the others the truth, after finding the dying Swann. The Doctor impersonates Salamander to access Kenowa. He discovers that Kent helped devise Salamander's plan and really wants to take over for himself. Bruce learns the truth. The base is destroyed as the inhabitants abandon it. Salamander kills Kent, then goes to the TARDIS and pretends to be the Doctor in order that Jamie and Victoria will take him away from here. The Doctor arrives in time, as Salamander tries to dematerialise with the doors still open. The would-be ruler of the world is sucked out into the Vortex. 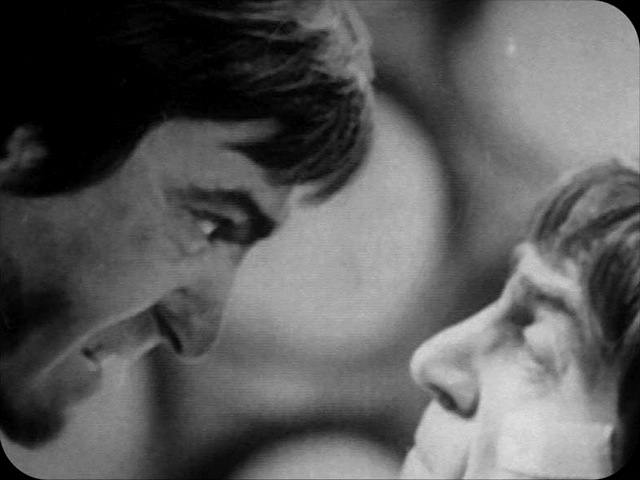 This six part adventure was written by David Whitaker, and was broadcast between 23rd December 1967 and 27th January 1968. The director is future programme producer Barry Letts. This is the last story to be produced by Innes Lloyd, with Peter Bryant as Story Editor. Only Episode 3 exists in the archives, though missing parts are covered by telesnaps (except for episode 4) and a soundtrack.
In the middle of the monster-filled Season 5, this story stands out like a sore thumb. As I mentioned in my post last month (Double-O-Eleven) it is an attempt to do James Bond - but on a BBC budget.
There's a villain out to rule the world, with a secret underground base and super-weapon. Astrid is very much in the Pussy Galore mould - a helicopter pilot who can beat up any latex-uniformed thugs her foes send against her. The globe-trotting requires some imagination - an Australian beach being in reality Littlehampton in Sussex, and Central Europe being entirely studio-bound.
It is a shame that part 3 is the only one that we can still watch - as it is the poorest of the six. Denes is infamously imprisoned in a set corridor, and we don't get a real feel for the programme's global intentions. If you ignore the episode on DVD and simply listen to the full story on audio only, it is actually quite impressive and you do get a hint of that international scale. 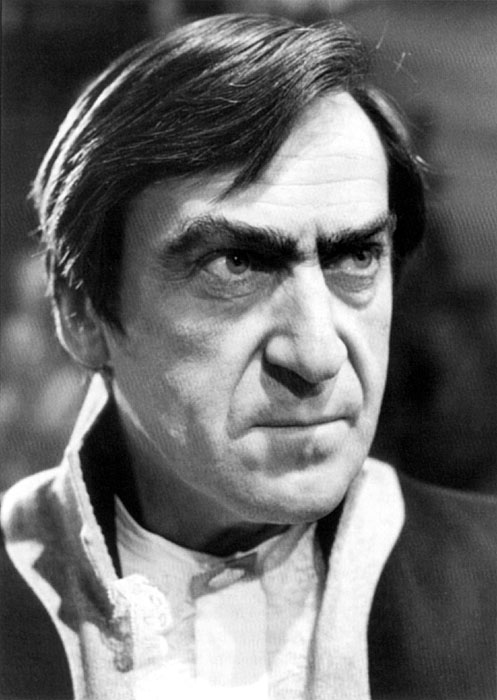 Salamander is, of course, played by Patrick Troughton. He makes for a very good villain - though the Mexican accent does wander around the Mediterranean region a few times. Having the star play the baddie does, however, mean that the Doctor is somewhat sidelined throughout much of the story - hiding in Australia - and unwilling to do anything against Salamander for a very long time. Future Doctors will topple whole empires just because of a hunch, but here he seems overly cautious. In hindsight, he was right not to trust Kent, as he might have simply replaced one dictator with another.
It's not a great story for Jamie and Victoria. They're absent from episode 4 altogether and can feel superfluous to events at other times - with Astrid playing a more prominent role in their place. She's played by Mary Peach.
Kent is played by the marvellous Bill Kerr. Listen in to BBC Radio 4 Extra any Wednesday and you'll hear him in his most famous role as Tony Hancock's hilariously dim-witted flat mate.
Bruce is Colin Douglas, who will return in the memorable role of Reuben the Rutan in Horror of Fang Rock. Benik is played by Milton Johns - who will be back as Guy Crayford in The Android Invasion, and Castellan Kelner in The Invasion of Time. He is superbly sadistic in this.
Denes is George Pravda - who will play a much nicer Castellan in The Deadly Assassin -as well as the rather incompetent scientist, Jaeger, in The Mutants.
An incidental character worth noting is Griffin the Chef - played by Australian actor Reg Lye - who provides some much welcome comic relief.
Episode endings for this story are: 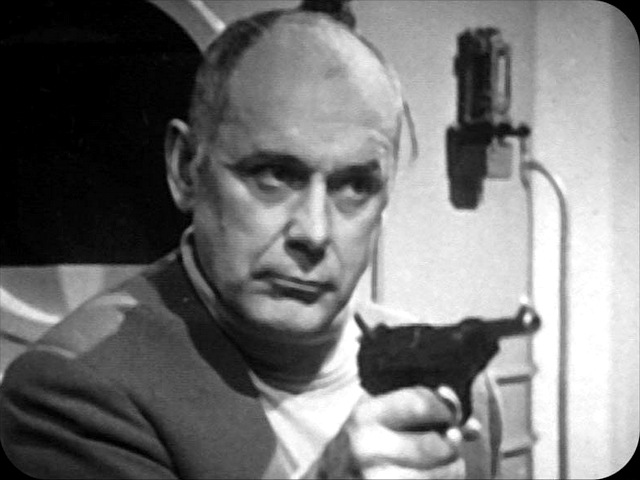 Overall, not as bad as its lowly reputation - mainly the result of that third episode. Listen to the soundtrack and you will actually quite enjoy.
Things you might like to know:
Posted by GerryD at 23:12