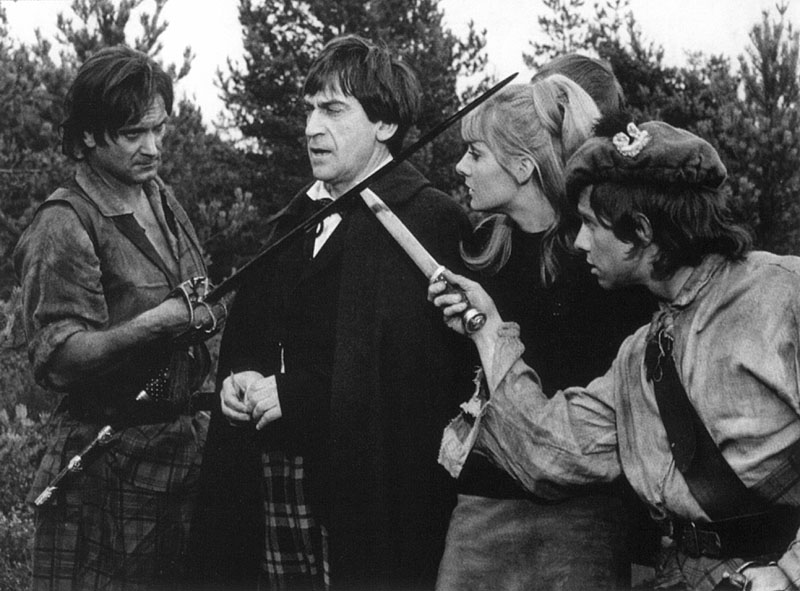 In which the TARDIS materialises in the Highlands of Scotland in April, 1746. The Doctor and his companions find they have arrived close to the battlefield of Culloden, just after the bloody conflict has finished. They are captured by a group of Scots from the defeated Jacobite side and taken to a cottage where Clan Laird Colin McLaren lies wounded. The group comprises his son Alexander, daughter Kirsty, and faithful young piper Jamie McCrimmon. The Doctor pretends to be a German physician and offers to help the wounded Laird. The cottage is attacked by English Lieutenant Algernon Ffinch and his troops. Alexander is killed whilst the others are captured. The Doctor, Ben, Jamie and the Laird are almost hung. A solicitor named Grey, who is part of the Royal Commission for Prisons, has other ideas for the prisoners. Polly and Kirsty escape. 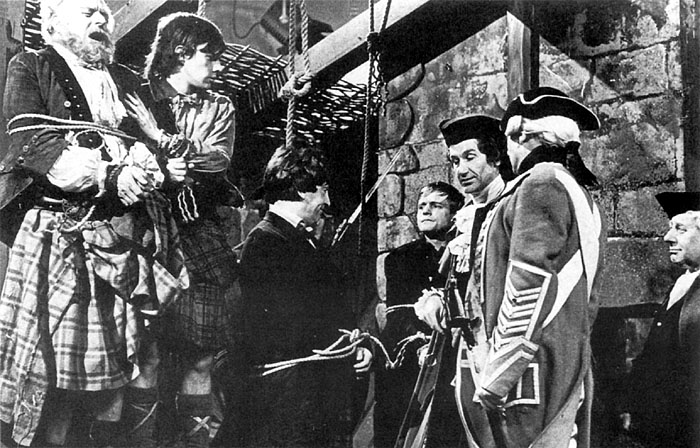 The prisoners are transported to prison in nearby Inverness. The Doctor escapes and dons a variety of disguises to remain at large - including an old woman and an injured Redcoat soldier. He learns of Grey's scheme to sell Scots prisoners into slavery in the West Indies. He is reunited with Polly and Kirsty, who have found a way to blackmail the rather ineffectual Lt. Ffinch into helping them. Grey has employed a brutish ship's captain named Trask to carry the prisoners to the Caribbean. Trask punishes Ben by submerging him repeatedly in the water, but the young matelot escapes to shore and meets the Doctor. 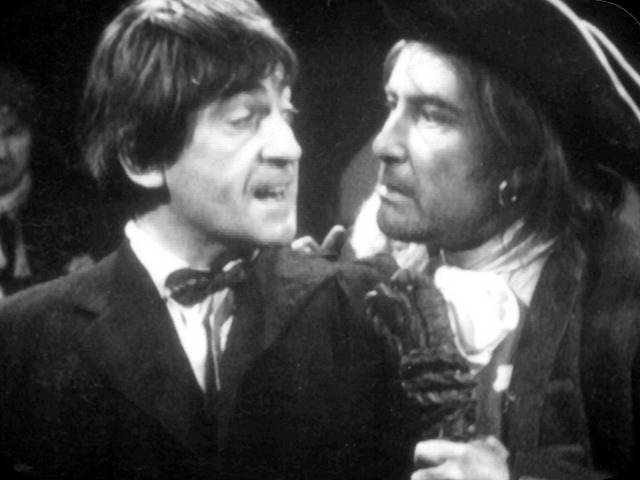 A scheme is devised to get weapons onto Trask's ship - The Annabelle. The Doctor fools Trask into believing that Jamie is a disguised Bonnie Prince Charlie. When he goes to the hold, he is overpowered. Wounded, he ends up in the harbour. Another prisoner, Willie McKay, takes control of The Annabelle and agrees to take the prisoners to safety in France. Jamie elects to stay behind to lead the time travellers back to Culloden. At the cottage, Grey tries to recapture them - only for Ffinch to arrest him for his illegal slavery plans. Jamie accepts an offer to join the TARDIS crew. 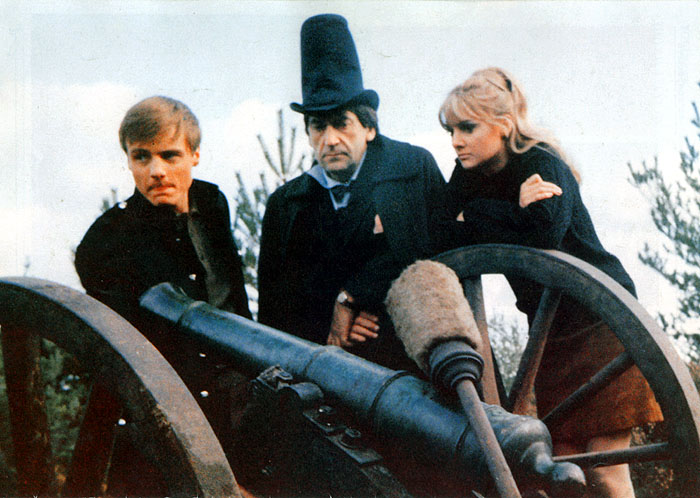 This four part adventure was written by Gerry Davis and Elwyn Jones, and was broadcast between 17th December 1966 and 7th January 1967. It is significant for the introduction of one of the programme's most popular companions - Frazer Hines' Jamie McCrimmon - and for being the last purely historical story until the early 1980's.
The story no longer exists in the archives - apart from one brief clip and a film trim of the TARDIS in the forest. The soundtrack is available to us, fortunately.
Whilst Jones gets a co-writer credit, he didn't contribute anything to the the finished script. Historical stories were proving less popular with the viewers, and Troughton himself agreed with the decision to bring them to an end - partly to dissociate his era of the programme from his predecessor's. 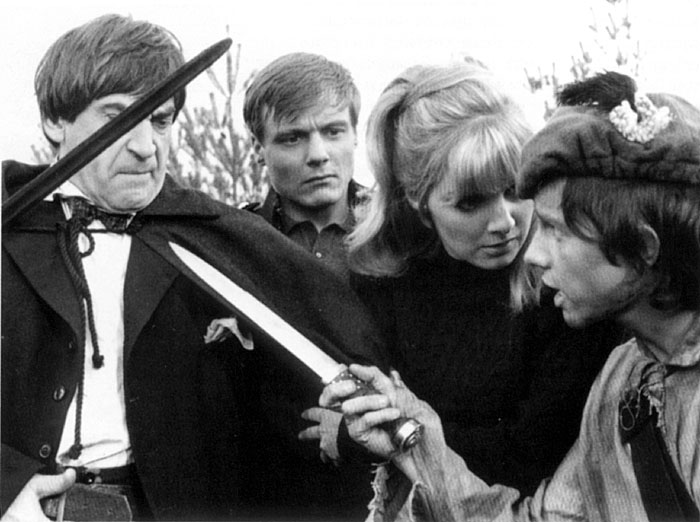 By splitting the regulars up, everyone gets a lot to do in this story. Troughton in particular gets to dress up in a variety of disguises and the Doctor uses his cunning to dupe Grey's assistant, Perkins, and Trask. He threatens people with a pistol - though it is not loaded and he admits he doesn't know how to use it.
Polly is teamed with Hannah Gordon's Kirsty as well as Michael Elwyn's foppish Ffinch.
Frazer Hines impresses from the start as the loyal young clan piper. He plays Jamie with a soft Highland lilt, which was fine for this one performance but would prove hard to sustain over a longer period. The original ending as filmed saw him left behind, but he impressed his co-stars and the production team so much that a second ending was filmed where he goes with the time travellers.
Principal villains of the piece are David Garth as the scheming solicitor Grey, and Dallas Cavell as the piratical Trask. Alexander, who only appears in the first episode, is played by William Dysart, who will have a more considerable role to play in The Ambassadors of Death - playing Reegan. Coincidentally, Cavell is also in that story, as Quinlan.
Episode endings for this adventure are: 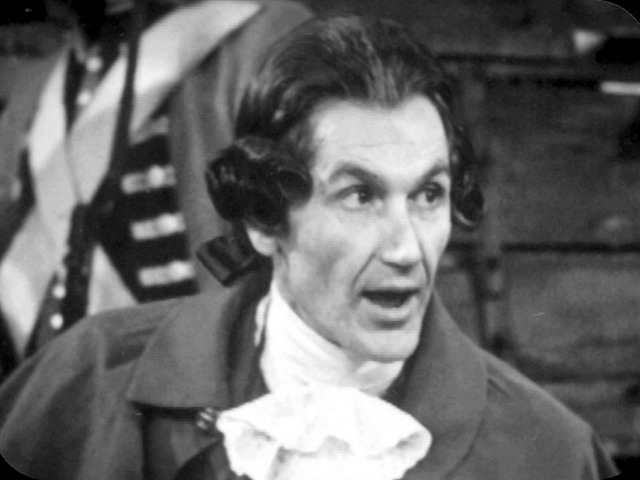 Overall, a great send off for the old historical stories. A fast moving adventure in the style of Robert Louis Stevenson. Jamie joins the TARDIS crew - and the rest is history.
Things you might like to know:
Posted by GerryD at 22:10