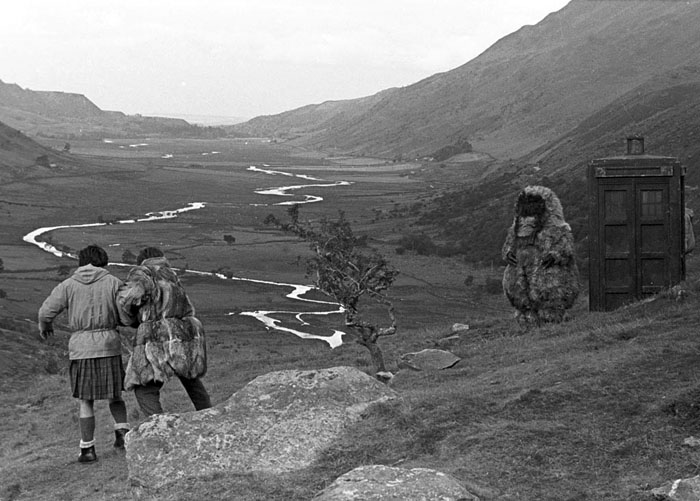 In which the TARDIS materialises in the foothills of the Himalayas of Tibet in 1935. The Doctor recognises the area as he has been here before. In 1630, he had helped the monks of the nearby Det Sen monastery, who were under threat from bandits. He had been given a sacred relic to look after - a small bell known as a Ghanta. He now has the opportunity to return it. He will go to the monastery alone. On his way, he comes across a wrecked camp site - and a man's body. At the monastery, an English explorer named Edward Travers accuses him of attacking his camp and killing his friend. The Doctor is wearing an oversize fur coat - which could have been confused with the wild animal he had earlier claimed was responsible. Before the Doctor can tell the monks why he has come, he finds himself locked up. Travers is leading an expedition to find evidence of the legendary Yeti, and thinks the Doctor is a member of a rival group. The monks can confirm the creatures do exist - and lately they have become more aggressive.
Fed up with waiting in the ship, Jamie and Victoria set off to find the Doctor. They come upon a cave in which there is a pyramid of metallic spheres. Jamie puts one in his bag, but they are then attacked by a savage Yeti. Despite being buried by rocks, it scrambles free, and they flee down the mountain. 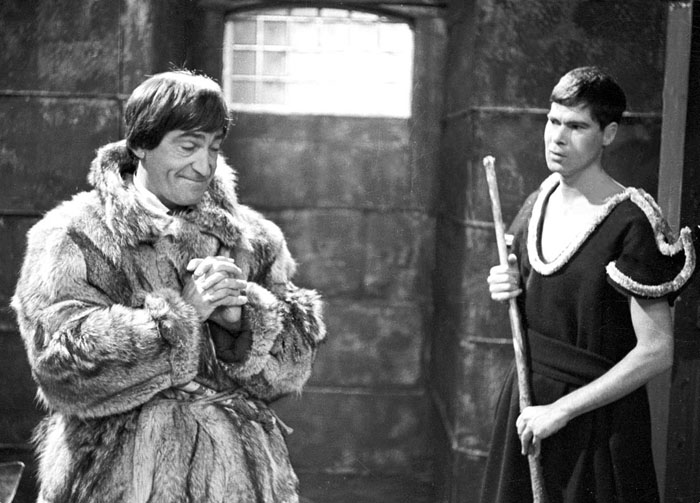 They meet Travers who is on his way up the mountain and tell him what they have seen. Jamie will show him where the cave is - but only after Victoria has been delivered safely to the monastery. The warrior monk Khrisong has decided to tie the Doctor to the gates to lure the Yeti down. If he is responsible for their turn of behaviour they will try to rescue him. If he is innocent, other monks will be poised to save him. The Doctor has managed to get the Ghanta to a young monk named Thonmi, who takes it to the inner sanctum. He gives it to Songsten, the Abbot. Under the instructions of an unseen presence within the sanctum, the Doctor is ordered set free. Travers admits he only accused the Doctor to keep him out of the way. A Yeti is captured when it approaches the gates. It becomes inert after a brief struggle. The Doctor examines it and finds it is really a fur covered robot - powered by a sphere in a chest cavity. This creature's sphere must have fallen out in the fight. The sphere has a life of its own and makes its way to its host - reanimating it. It smashes its way out of the monastery. 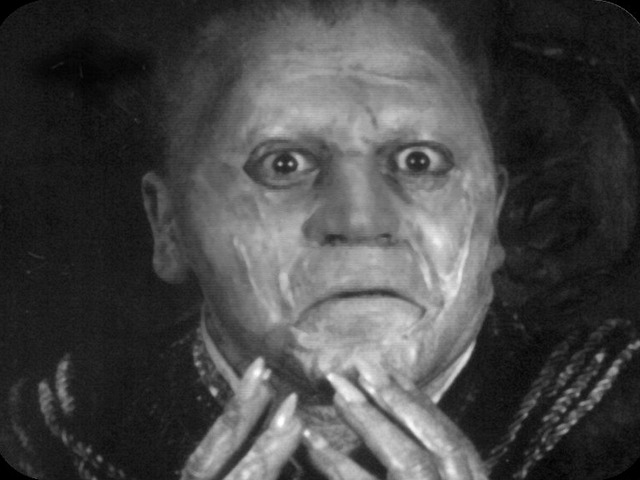 When Travers goes to the cave, he sees the metal spheres split open and a glowing viscous liquid pours out in increasing quantities. The Doctor discovers that the Master of Det Sen in 1630 - Padmasambhava - is still alive. He has been taken over by a disembodied alien force - the Great Intelligence. It seeks to form a bridgehead on Earth in this remote region. The substance in the cave starts to cover the mountain top. It will eventually consume everything. Victoria comes under its influence in order to try to get the Doctor not to interfere. He builds a device which can track the Yeti control signals - and disable them at close distance. The monks evacuate the monastery as it comes under attack by Yeti. Khrisong is killed. The Doctor and Padmasambhava fight a mental duel, whilst Jamie and Thonmi locate another pyramid of spheres at the monastery. They smash them. The Intelligence is ejected back into deep space, the mountain top exploding. All the Yeti collapse. The ancient Master dies in the Doctor's arms. The following day, as he accompanies the travellers back to the TARDIS, Travers sees a real Yeti and sets off in pursuit. 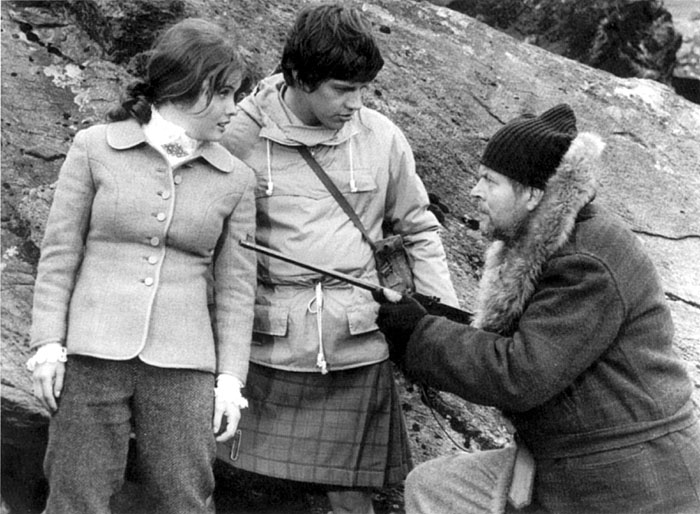 This six part adventure was written by Mervyn Haisman and Henry Lincoln, and was broadcast between 30th September and 4th November, 1967. Only episode 2 exists in the archives, as well as the soundtrack and telesnaps for the lost episodes. We also have some amazing colour location cinefilm footage to enjoy, taken by director Gerald Blake. The producership of the programme reverted to Innes Lloyd, and Peter Bryant went back to being Story Editor.
The term "lost classic" gets bandied about a lot - but in this instance it is the best possible description. Every aspect of performance and production gels with this story.
The regulars all have a good share of the plot. Troughton has some marvellous humorous moments - such as his alarm at the thought of Jamie having an idea and his solution to getting round a Yeti that has been set as guard on the TARDIS - "Bung a rock at it".
The guest cast is superb - led by Debbie Watling's dad, Jack, as Travers. Khrisong is played by Norman Jones - who will return to the programme as Major Baker in The Silurians and, more memorably, as Hieronymous in The Masque of Mandragora. Songsten is Charles Morgan - who will be back to anoint the Fourth Doctor as President of the High Council of Time Lords in The Invasion of Time. Wolfe Morris, best known from radio drama, is Padmasambhava, as well as providing the rasping voice of the Great Intelligence. Young Thonmi is played by David Spenser.
The only contentious aspect of the production is the casting of white actors as ethnic characters - but this was simply how things were done at this time. 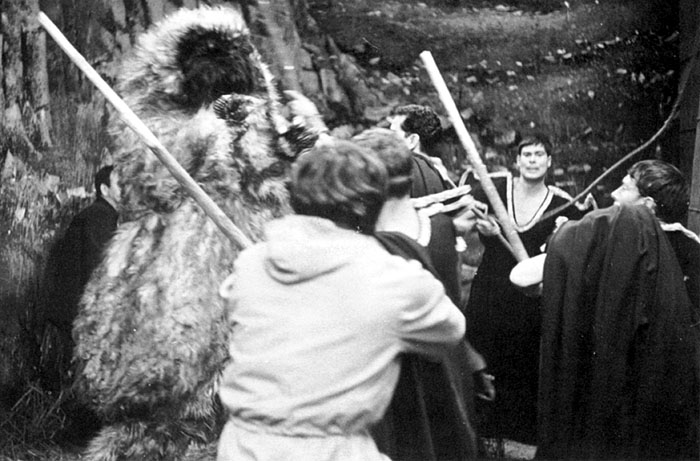 When I was young, I have to admit that I thought the Yeti were a bit cuddly and I wanted one for Christmas instead of a teddy. Considering they have to be a man-in-a-suit creation, they are very well realised.
The monastery sets are fantastic - including a large seated Buddha statue. There is no incidental  music, but Buddhist chants are heard throughout the monastery scenes. The bleeping sound of the spheres is distinctive - as famous a sound effect as the Dalek control room "heartbeat".
The location work was filmed in North Wales - sadly snow free, as there is snow seen on the TARDIS scanner in the opening sequence...
Episode endings for this adventure are: 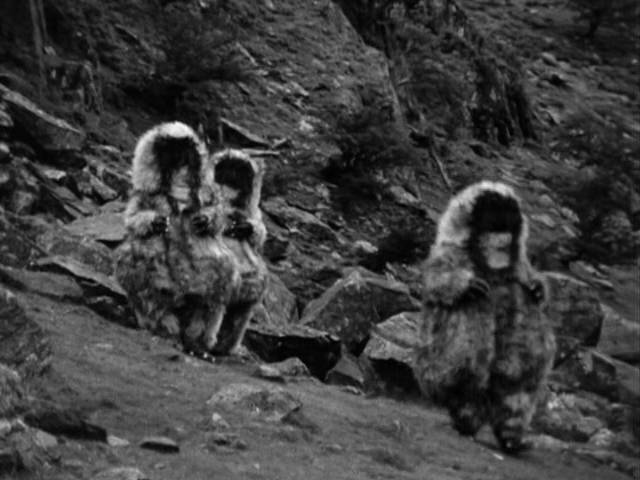 Overall, as I said at the beginning, a classic Doctor Who story. Everything comes together perfectly. No wonder a sequel was set up almost immediately. Read the recently re-released novelisation and / or listen to the soundtrack. Shame I never did get a Yeti that Christmas...
Things you might like to know:
Posted by GerryD at 23:26