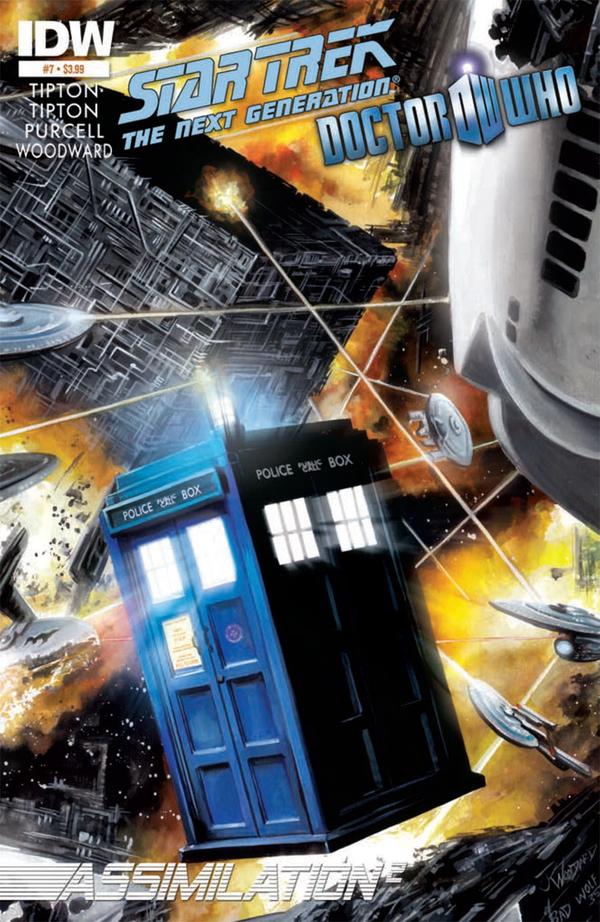 Issue 7 arrived today. Thankfully, someone has started to get Rory's face right, and there are Cybermen - but only at the very end.

Last time, the Doctor, Amy and Rory had travelled by TARDIS to the Borg Cube at the Battle of Wolf 359 in order to get a copy of the Borg memory and command routines. The Borg do not interfere with them as they aren't seen as a threat. The Doctor takes some time to explain about the creatures to his companions. They get what they came for and return to the Enterprise a few seconds after leaving it. The Borg who has been helping them (the Conduit) has upgraded the engines - but it won't make the ship fast enough to catch up with the Cybermen - who are approaching the Borg homeworld. An away team will have to use the TARDIS, and Picard insists on leading it. The Doctor declines a weapon. Riker asks Dr. Crusher if there is any hope that the Conduit - his friend Captain Bertrand - can be freed from the Collective. The TARDIS materialises on the Cyberman spaceship - and the intruders are detected immediately. Cybermen attack, as the Doctor and his friends try to get to the engine room and bridge to slow the ship down long enough for the Enterprise to arrive. Picard is confronted by a huge army of Cybermen...

Finally some action - and some Cybermen. Nice to see Amy and Rory get a significant part to play. The Doctor asks them to stay behind when he takes the away team to the Cybership - knowing they will refuse. They do get talked by Lt. Worf into taking up weapons in the Doctor's absence.
It's full steam ahead as we move towards the story's conclusion.
Posted by GerryD at 19:45