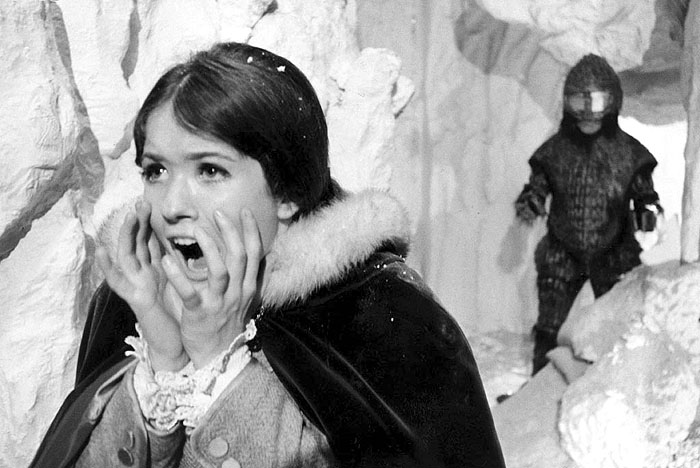 In which the TARDIS materialises in a future England threatened by a new Ice Age. The ship has landed on its side outside a large dome. Within is a preserved Georgian building. This is Brittanicus Base - front line in the battle to hold back the advancing glaciers. At first the travellers are assumed to be scavengers and are about to be forcibly relocated to an ice-free region near the Equator. The Doctor recognises that the computer is about to destroy the base and he quickly fixes it. Base leader Clent is impressed. He has recently lost his computer expert, Penley, after a number of arguments and allows the Doctor to stay if he can help. It transpires that this Ice Age was triggered by man-made pollution of the atmosphere and loss of vegetation. A number of bases have been established across the world to stem the ice advance using an Ionisation process. Brittanicus is a weak link in this chain - threatening the whole programme. An ex-archaeologist named Arden is fitting sensors to the glacier and comes upon a body frozen in the ice - that of a huge armoured figure. Despite Clent's objections, he cuts it free and brings it back to the base. Thermal packs are set to defrost the body. The Doctor is concerned, as he spots electronic components on the supposedly ancient warrior. The Ice Warrior - Varga - comes back to life and abducts Victoria. 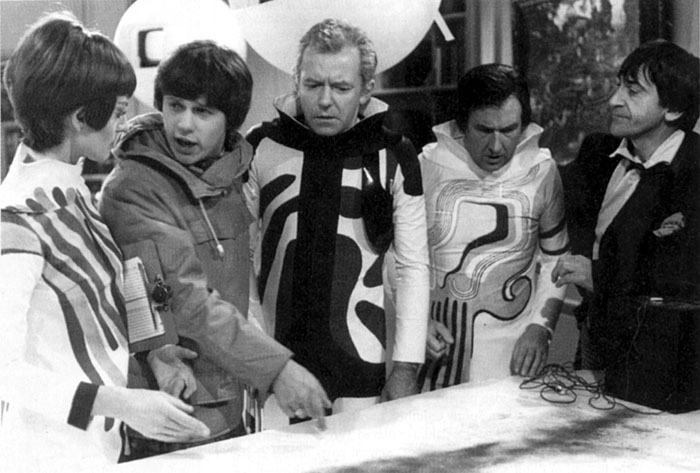 Varga tells Victoria that he comes from Mars, and his spaceship crash-landed during a previous Ice Age event. He plans to find his craft and resurrect his crew. Taking more thermal packs, they leave the base. Arden and Jamie follow. The Ice Warriors kill Arden and injure Jamie. He is found by Penley and a scavenger named Storr, who are living in the wilderness. The Doctor advises Clent that he cannot use the Ioniser until he has ascertained the nature of the alien ship's engines. They could trigger a nuclear explosion. When Arden and Jamie fail to return, the Doctor sets off to find them and try to discover the alien propulsion method. He is reunited with Jamie, and urges Penley to take him back to the base. Victoria escapes and meets Storr. The scavenger tries to ally himself with the aliens by taking her back, but he is of no value to them and is killed. The Doctor is captured, but - as a scientist - he is allowed to live. He pretends that the base has a power system the Ice Warriors could use to re-energise their ship. 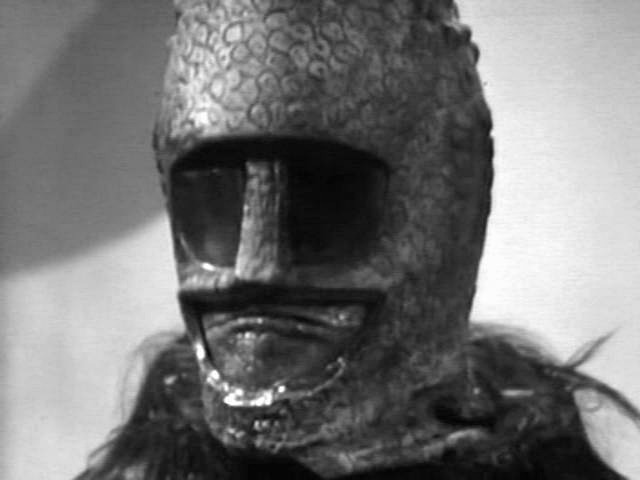 The aliens attack the base but find they have been duped. The Doctor overpowers a Warrior using a stink-bomb and employs their sonic cannon weapon against them. Penley raises the temperature and humidity to force them to return to their ship. The Doctor now knows that the Ice Warrior ship poses no threat to the Ioniser. He and Victoria return to the base. The computer cannot make the final decision, and Penley and the Doctor urge Clent to make the choice without it. The Ioniser is activated and causes the Ice Warrior spacecraft to explode, destroying its occupants. Penley and Clent are reconciled and will work together to halt the glaciers - whilst the TARDIS crew slip quietly away. 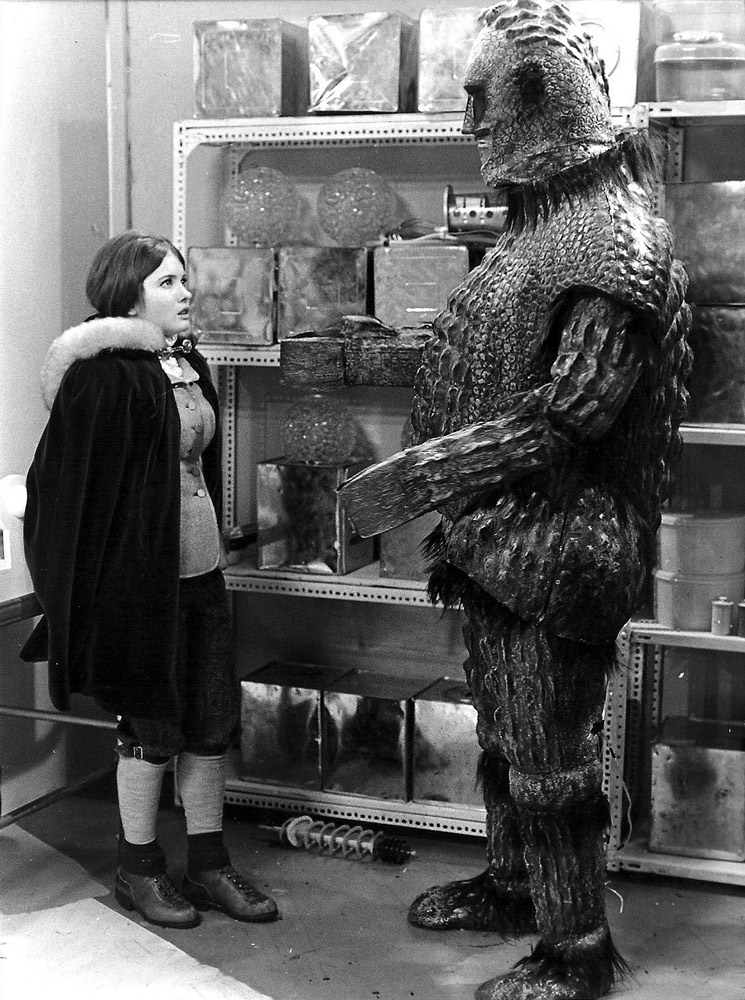 This six part adventure was written by Brian Hayles, and was broadcast between 11th November and 16th December, 1967. Episodes 2 and 3 are missing from the archives though telesnaps and the soundtrack do exist. It is expected that the eventual DVD release will have animated missing episodes.
The story is significant for introducing the Ice Warriors - despite only four appearances, one of the programme's most popular monsters.
With the discontinuation of historical stories, the production team had found a winning formula in base-under-siege stories with strong new monsters. The Ice Warriors are a wonderful concept - intelligent, articulate and noble creatures. They are reptilian in nature, and it is implied in this story that their appearance is due to them wearing armour - rather than this being their true form. They have a sonic weapon built into their arm. The death effect is achieved by filming the victim reflected on a sheet of flexible mirrorlon, which is poked by someone from behind to give the wobbling effect.
Varga is played by Bernard Bresslaw - famous from TV comedy The Army Game (which featured William Hartnell) and the Carry On... series of films. 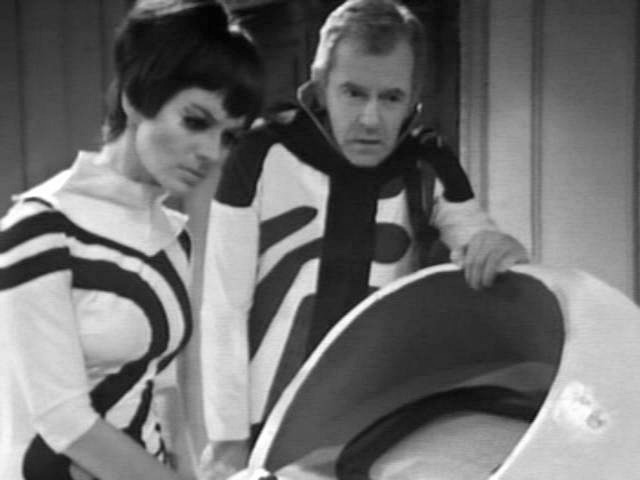 An underlying theme of the story is the reliance on technology to solve problems. The role of the computer, voiced by Roy Skelton, is discussed throughout. Clent is over-reliant on it to solve all his problems. His assistant, Miss Garrett, is the same - but this may be due to a serious case of unrequited love on her part for the leader. Penley, the actual computer expert, knows their limitations and argues for some human intuition some of the time, rather than slavish obedience to what it says. When the time comes for it to make a crucial decision, the computer hits a logical impasse - unable to agree to something that might destroy it - and so a human decision has to be made.
Clent is played by Peter Barkworth. He chooses to play him with a limp. He's crippled both physically and emotionally. Penley - Peter Sallis - describes him as having a printed circuit in place of a heart. Whilst Clent is emotionally cold, Penley is all anger and frustration, and has decided he's had enough. He has dropped out of this society to live a more natural life in the icy wastes. Storr - Angus Lennie - hates science and scientists and blames them for all that has happened to the Earth.
Sallis - famous for his performance as Norman Clegg in the long-running Last of the Summer Wine series - almost returned to the programme in the 1980's. He was cast as Captain Striker in Enlightenment, but a change of studio dates meant he had to withdraw. Lennie will be back in The Terror of the Zygons.
Episode endings for this story are: 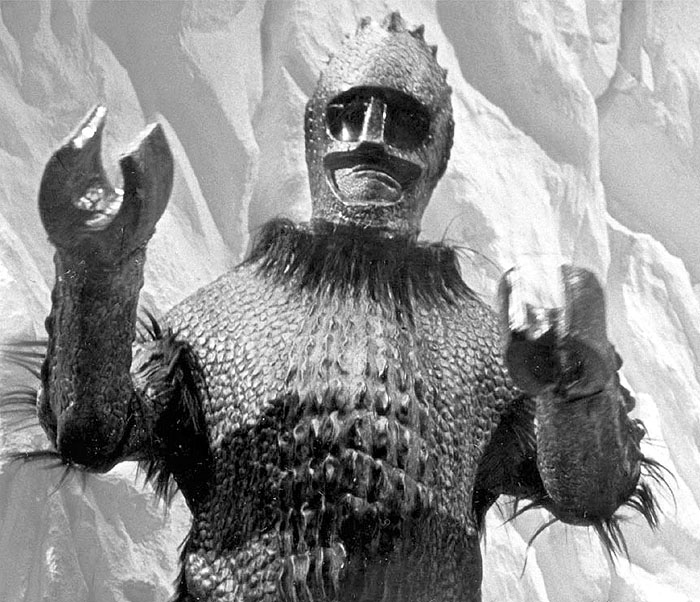 Overall, a very good story that holds up well over its six episodes. The Ice Warriors are a memorable addition to the programme - visually stunning and with a lot of potential for future appearances. Come on Moffat - time for a return. The performances from the regulars and the guest cast are very strong.
Things you might like to know:
Posted by GerryD at 23:10