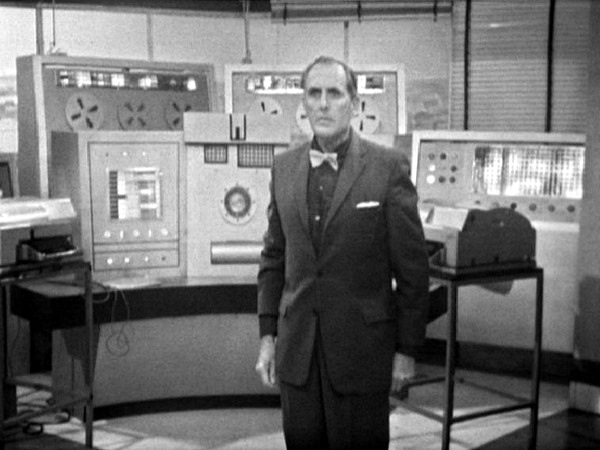 July 1966 was a very busy month on planet Earth - as far as alien (and Earthbound) attempts at domination are concerned. WOTAN decided it could make a better job of running Humankind, whilst the Chameleons were hard at work down at Gatwick Airport abducting young holidaymakers so they could steal their identities. Did the Daleks, popping back and forth from the Victorian era to Edward Waterfield's antiques emporium even acknowledge any of this?
And all of this going on under Torchwood's nose...
And that's the point of this post - the dangers of later writers trying to retrofit their work onto an established chronology.
Did you ever watch Star Trek: Enterprise? The last of the TV franchise shows was a prequel - and this seriously hidebound the writers. When they wanted to include a race that we know hasn't been seen before in chronologically later series - the Borg and the Ferengi for instance - they had to come up with some convoluted ploy to ensure continuity was preserved. How can Picard say they've never met the Borg before when a generation earlier, Captain Archer had encountered them? Well, have the Enterprise crew and the Borg not actually meet each other. Ferengi? Have them invade the ship when everyone is unconscious. Let me take you back to 1941. Captain Jack turns up intent on selling a con to what he thinks is a Time Agent. There is another Captain Jack working for Torchwood Cardiff, with a third version in cold storage since Victorian times in the morgue. And a fourth one who has been sent back to the Cardiff Blitz. The contemporary one will remember meeting the Doctor and Rose in London - so needs to steer clear. The one sent back from the future is probably too busy chatting up the real Captain Jack Harkness to call upon the contemporary one for help. You see how confusing things can get?

Jump forward to July 1969. The Doctor is in a quandary how to defeat the insidious presence of the Silence. He should have remembered that his previous incarnation and Martha were in England at exactly the time (they watched the Moon landing on TV). Did he make a phone call? Was the resolution to the whole problem sorted out in between the two episodes by the Two Doctors on transatlantic phone calls? If not, why not? Maybe Eleven rang Captain Jack in Cardiff for a bit of advice instead.
Talking of the Silence, every single Earth-based story set up to July 1969 has the Silence in the background. They obviously like to keep the lowest of profiles not to have shown up for so long - and for the Doctor not to have come across them in over 900 years worth of visits. Unless he forgot them. Unless we also forgot them. Maybe they are in The Aztecs - but we just forgot... Who was I talking about...?

Torchwood presents us with one of the biggest retrofit conundrums. Not just the fact that Captain Jack is desperately waiting to meet the Doctor for over a century, when he's been coming and going the whole time - and working for UNIT for several years - but what was the organisation doing during all those stories set between their founding and their unmasking in 2006? Aliens are popping up all over Britain all the time - but not a peep out of Torchwood.
Torchwood was a brilliant - if somewhat flawed - concept by RTD, and I'm sure he did consider the retrofitting problem. I think he probably just decided to ride roughshod over it in order to tell some new and different stories. Maybe that's the best attitude to take when it comes to trying to write Doctor Who "histories of the universe". Just accept the inconsistencies - and don't waste your time.
Posted by GerryD at 22:29