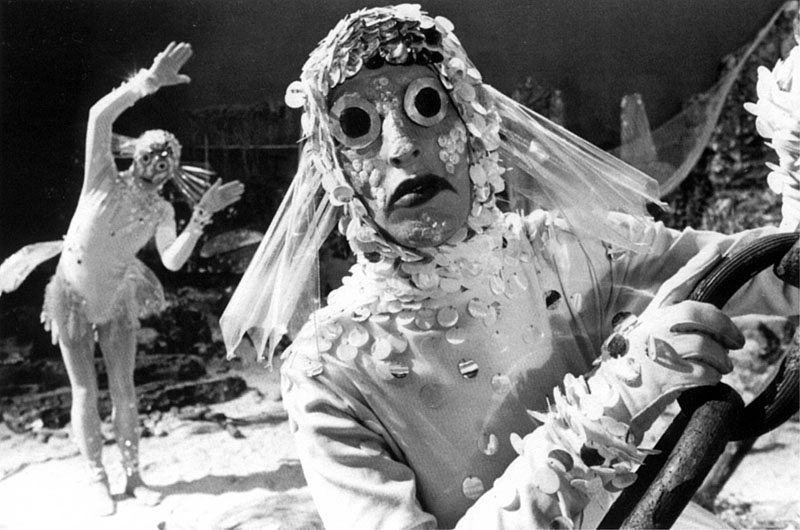 In which the TARDIS materialises on a small rocky island, south of the Azores. Exploring, the travellers find that the island is of volcanic origins, and a washed up souvenir vase from the 1968 Mexico Olympics gives some idea of the date. Entering a cavern, the travellers are overcome by gas. The cave proves to be a disguised lift shaft, and they wake to find themselves deep underground, in what was once the great city of Atlantis. The Doctor spots processed seafood and deduces that Professor Zaroff is here. He went missing a few years ago, and was a pioneer of food processing. He sends him a note, and the Professor's arrival at the temple saves the travellers from being sacrificed to the Goddess Amdo - by being fed to hungry sharks. 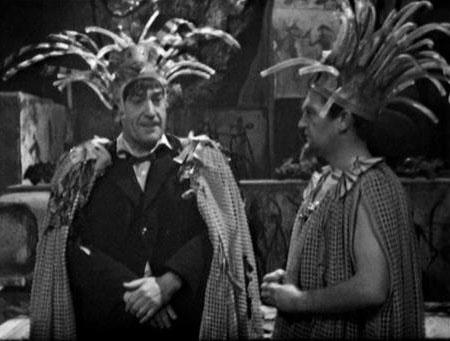 The Doctor is taken to Zaroff's laboratory, whilst Ben and Jamie are sent to work in the mines. Polly will be turned into one of the Fish People. Scientist Damon has turned many people into Fishworkers, and they harvest all the food for the city from the sea. The Doctor learns of Zaroff's plan to raise Atlantis back to the surface to become a world power once again. Zaroff is mining down into the centre of the Earth and intends to flood the shaft with sea water. Rather than raise Atlantis, he will split the planet in half. The Doctor sabotages the power and Polly's operation cannot go ahead. She is rescued by a girl named Ara. The Doctor flees the lab and finds an ally in the High Priest, Ramo, who does not trust Zaroff. King Thous is deaf to his warnings - eager to see his civilisation rise again. 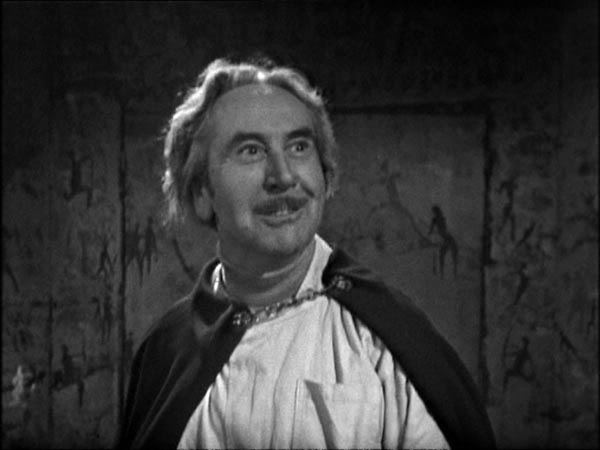 An attempt to kidnap Zaroff fails and Ramo is killed. The Doctor sends two freed prisoners - sailors Sean and Jacko - to convince the Fishworkers to rebel. Zaroff's food processing does not preserve for long, and Atlantis will soon starve if they withhold their labour. The increasingly deranged Zaroff shoots and wounds Thous and takes over - beginning his plan to flood the shaft. The Doctor orders the population of the city to the upper levels as he intends to flood the lower reaches where Zaroff's laboratory is situated. The sea defences are breached and Zaroff drowns. The survivors of Atlantis elect to make do with their subterranean existence, and the Fish People will no longer be slaves. 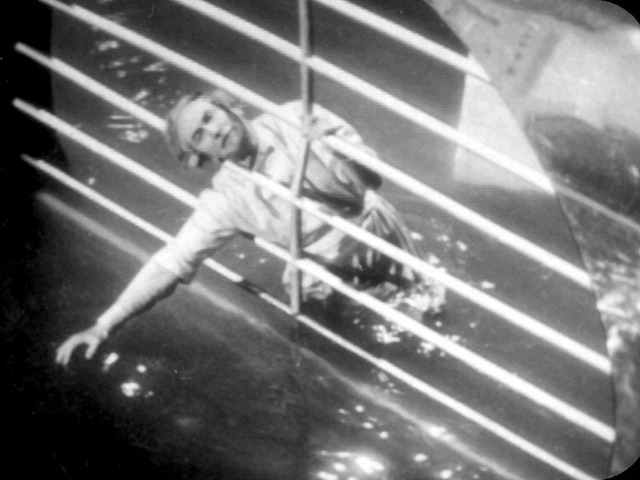 This four part adventure was written by Geoffrey Orme and was broadcast between 14th January and 4th February, 1967. Until last year, only episode 3 existed in the archives. In December 2011, it was announced that episode 2 had now been found. We have the audio for the missing episodes, as well as brief censor clips of Polly on the operating table and Zaroff's demise.
The Underwater Menace was originally dropped after being considered too expensive and difficult to realise. It then bounced back as a rushed replacement for the story that had replaced it - "The Imps" - which fell through when writer William Emms took ill. This may be one of the reasons why it is so poor. Characters are entirely one dimensional, and much of the dialogue is atrociously hackneyed.
It very much has a B-movie feel to it, and reminds this reviewer of some of those 1930's weekly cinema serials. (Crash Corrigan in The Undersea Kingdom, 1936, anyone?). 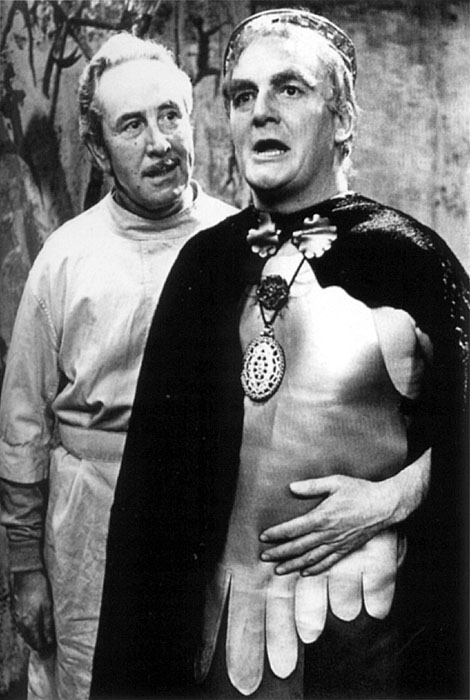 Troughton is still finding his feet as the Doctor, though we start to see more of his gentle humour in this. At one point all the regulars are in disguise - Ben and Jamie as guards, Polly as an Atlantean with seashell hat, and the Doctor in a bizarre gypsy-like get up including shawl and headscarf.
With Jamie such a late addition to the line up, he ends up having to take half of Ben's lines and the two male companions find themselves paired up for the duration.
The quality of guest actor is actually very high - with Tom Watson as Ramo, Peter Stephens (from The Celestial Toymaker) as fellow priest Lolem, Colin Jeavons (from K9 & Company) as Damon, and Noel Johnson (who will be back in Invasion of the Dinosaurs) as King Thous.
It is principal guest Joseph Furst as Zaroff who seriously lets the side down. He's not a bad actor by any means, but in this he is simply allowed to go totally "over ze top". His natural accent is, well, accentuated, and the director, Julia Smith, fails to rein him in. I assume he thought Doctor Who was either a kids' programme or teatime melodrama, rather than family drama. Zaroff's motivation for destroying the planet - along with himself - is never articulated on screen - making him a one dimensional 'mad scientist'. The novelisation does give some back-story - in that he is revenging himself against the world for the death of his family in an accident. 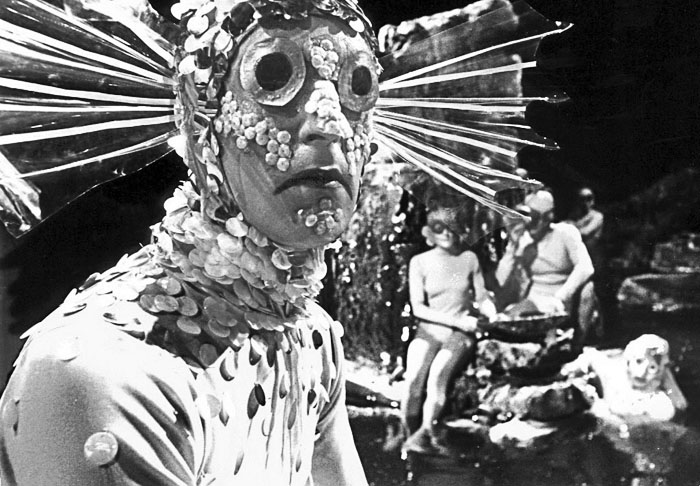 The "monsters" of this story are the poorly realised Fish People. They were no doubt quite effective on old 405 line televisions, but do not hold up to any scrutiny in the Remastered DVD era. Paper eyes and scaly sequins, and some are simply wearing swimming caps and goggles. The famous "underwater ballet" of episode 3 is actually quite compelling in a surreal sort of way, thanks in part to Dudley Simpson's electronic score. Dialogue tells us that some of the Fish People are a natural species, and that only some have been medically engineered.
Episode endings for this adventure are: 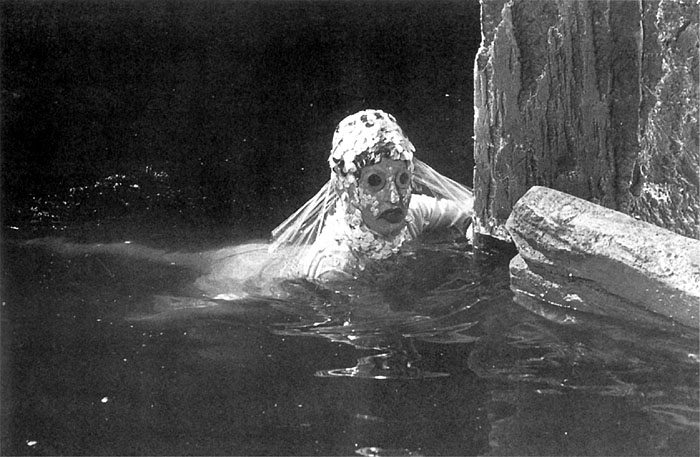 Overall, one of the weakest Doctor Who stories, with dreadful dialogue and at least one over the top performance. If you love 1950's Sci-Fi B-movies you might just develop a soft spot for it.
Things you might like to know:
Posted by GerryD at 20:15