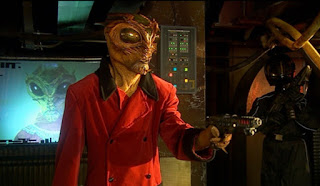 In which Sarah Jane Smith investigates the disappearance of a teenage boy named Lance, who attends the same school as Luke, Maria and Clyde. He had been obsessed with a futuristic role-playing game at a branch of Combat 3000. Computer Mr Smith reveals that a number of children have gone missing in the last few weeks, all from the vicinity of Combat 3000 establishments. Luke cannot understand why people would want to play such games, so Clyde decides to introduce him to them. Sarah, meanwhile, has discovered that strange meteorological events have taken place in the area of the arcades when the disappearances have occurred. She and Maria go to a nearby hill and set up a machine to monitor the weather. Luke and Clyde prove to be very good at the game, easily getting to the end of Level 1. The owner, Mr Grantham, is impressed by their performance and offers them the chance to try the next level. They are once again successful. They reach a metal-walled room, and are bathed in a strange light. Sarah and Maria spot some weird weather as a storm brews immediately above the Combat 3000 arcade. 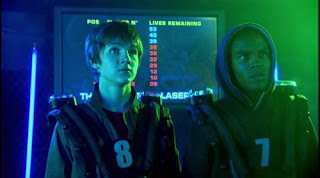 They go to the establishment and meet Grantham, and learn from him that he has a business partner named Mr Kudlak. Breaking into his office, they find that this is an insectoid alien. Luke and Clyde have been teleported up to a spaceship in orbit above the Earth, where they discover Lance and several other youngsters being held in captivity. Sarah and Maria escape back to Bannerman Road where Mr Smith identifies Kudlak as a member of the warlike Uvodni race. They fought a long war against the Malakh, which ended in their defeat 10 years ago. Grantham breaks into the house but is overpowered and forced to transport Sarah and Maria to the spaceship. Here they learn that Kudlak was retired from the fighting after being wounded and sent to Earth to recruit more warriors. He takes his orders from The Mistress, who only ever appears via a view screen. Kudlak has been sending young people to fight in the wars for years. Luke manages to discover that Mistress is merely a computer programme which has suppressed the fact that the war is long over. Realising that he has been sending the young people to a conflict which no longer exists, Kudlak destroys Mistress, then vows to set off and find the people he has sent away, so that they can be reunited with their families. Everyone is returned to Earth, and find that Grantham has fled. 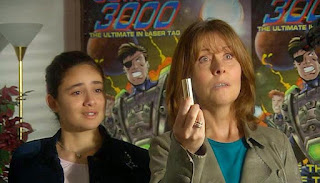 Warriors of Kudlak was written by Phil Gladwin, and was first broadcast on 15th and 22nd October 2007. This was Gladwin's only contribution to the Doctor Who universe. He had previously written for Grange Hill and The Bill, and had been a script editor on Casualty.
The inspiration for the story comes from the then-popular live action shoot-em-up games - a high tech version of paint-balling where points are scored using lasers.
The episode develops Luke's attempts to assimilate, as he first tries to master humour from Clyde, then seeks to understand why people like Lance love these kinds of games. He gets a kiss from one of those he has helped to rescue - a girl named Jen. Clyde realises that romance is an area that he cannot really help him with.
Paul Kasey plays Kudlak, though he and the Mistress are voiced by Silas Carson, best known as the voice of the Ood, plus various alien creatures in the Star Wars prequel movies. Grantham is played by Chook Sibtain, who went on to play Tarak Ital in The Waters of Mars.

Overall, an entertaining enough 50 minutes. Kudlak's is a great make-up, but the effect is rather diminished by the rest of his uniform - looking like he's pinched his mum's coat.
Things you might like to know: