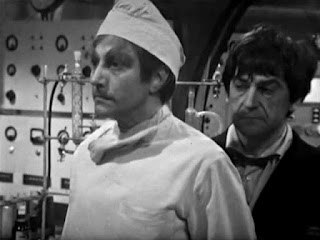 Damon was chief scientist and surgeon in the city of Atlantis. This was in the ruins of the once great civilisation, now hidden deep beneath a volcanic island. Damon was responsible for creating the Fish Workers - people surgically altered to live under water, who harvested food for the city. He was an enemy of Professor Zaroff, who had convinced King Thous that he could return the city to the surface to become a great power once more. The Doctor unmasked Zaroff as a madman determined to destroy the city, and the entire planet. The only way to stop the Professor was to flood the lower levels of the city. Damon helped to save Thous, and vowed that they would rebuild Atlantis using science, and without any of their ancient superstitions.

Played by: Colin Jeavons. Appearances: The Underwater Menace (1967).
Posted by GerryD at 22:34