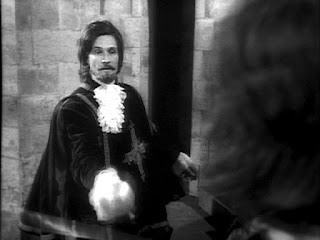 D'Artagnan was the hero of Alexandre Dumas' famous 1844 novel The Three Musketeers. He was summoned up by the Doctor in the Land of Fiction to fight on his behalf. He fought a duel with that other famous swordsman Cyrano de Bergerac, who was called upon by the Master of this domain. The Master then changed Cyrano into the pirate Blackbeard, but the Doctor countered by replacing D'Artagnan with Sir Lancelot, on horseback and in full armour.