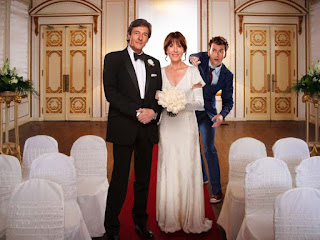 When Sarah Jane Smith began acting suspiciously, her son Luke and his friends Clyde and Rani became concerned about her. They followed her one evening - only to discover that she was on a dinner date. The new man in her life was the charming Peter Dalton. He and Luke became friends, but Clyde remained suspicious about him. He and Rani went to his home and found that it appeared abandoned. Dalton proposed to Sarah, giving her a ring with a special stone in it. This exerted a hypnotic effect over her, causing her to decide to relinquish her work. Their wedding took place at a country house hotel, where it was revealed that Dalton was an agent of the Trickster. The hotel was cut off, caught in a one second fold in time. The Doctor arrived and met Luke, Clyde and Rani, but they were trapped in a different second of time from Sarah and Dalton. It transpired that Dalton had fallen down the stairs one day, and the Trickster had saved him just at the point of death - offering him continued existence if he stopped Sarah from interfering in his schemes. Clyde became imbued with Artron energy after touching the TARDIS, and he was able to use this against the Trickster. Dalton decided to go back on his agreement in order to free Sarah, even though this would mean that he would die.