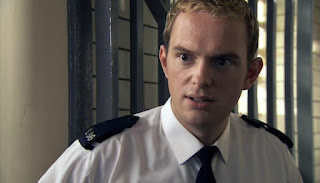 Gwen Cooper's partner in the Cardiff police force before she left to join Torchwood. He was with her, investigating a murder, when she first saw the team in action and decided to find out more about them. Following her departure, he continued to meet his ex-colleague whenever the police stumbled across an incident which Torchwood would take over. He alerted them when a Roman Legionary turned up in the city, and later joined forces with Rhys when the station came under siege by Weevils. Andy informed Gwen of a support group for the relatives of missing people, whom she discovered had been swallowed up by the space / time Rift that ran through the city. When the Hub was destroyed and the team were forced to go on the run, Andy assisted them. During the Miracle Day global event, Andy once more came to Gwen's assistance - helping to hide her terminally ill father and getting Rhys in to see him when he was captured, so that he would be with him when he died. He had earlier been forced to help extradite Jack and Gwen to the USA. By this stage he had become a sergeant. Andy carried a crush for Gwen, and was always jealous of Rhys. This is why he did not attend her wedding.