Inspirations - The Seeds of Death 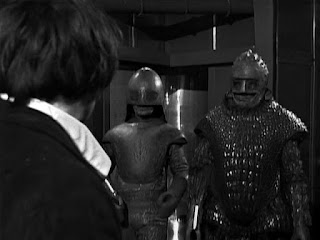 It is the last monster story of the B&W 1960's phase of the programme - even though another 16 weeks have to be filled after this. Trouble is the money is starting to run low, so not enough for any new monster costumes. There are those expensive Ice Warriors in stock, which have only been used once, and they were quite popular with the viewers, so let's have them back again.
This partly explains The Seeds of Death, by Brian Hayles. The story Hayles actually submitted was "The Lords of the Red Planet", which was a sort of origins tale for the Ice Warriors. The Doctor and his companions arrived on Mars to find a society split on class lines, like Patricians and Plebeians. There was an elite, known as the Gandorans, who were reptilian humanoids. Beneath them were the genetically engineered Saurians, who formed the army and were something of a slave caste. These latter creatures were what we know as Ice Warriors. There was civil strife between the Gandoran leadership and the rest of the society, and a threatened invasion of the Earth, and it all ended with the Saurians being left in charge of the planet. Derrick Sherwin and Terrance Dicks were not happy with this initial proposal, so Hayles was sent back to the drawing board. He came up with a totally new idea, which is something like what we see in the finished programme. However, it is known that Dicks carried out some major rewrites on it, not least having to write the Doctor out of the fourth episode so that Troughton could have a holiday. 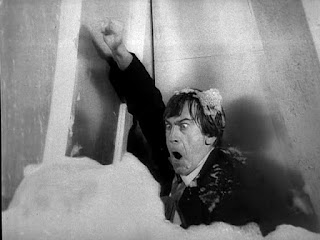 What we got instead was a more conventional alien invasion story, with base-under-siege elements thrown in. Much of the adventure takes place in a Moonbase - the second of the Troughton era. This base acts as relay for a new transport facility - T-Mat. This is a form of instantaneous matter transmission, and it has replaced more conventional transport systems, including road vehicles and spaceships. The implication is that Mankind does not venture into space at all during this period, not even to the Moon. The Ice Warriors see the planet's over-reliance on T-Mat as a weakness, which they will exploit in their invasion plans. By taking control of the Moonbase, they cripple transportation of vital commodities across the globe, but their main aim is to use the system to transport Martian seed pods to Earth. These will produce a plant blight that will destroy vegetation and disrupt CO2 production, eventually altering the atmosphere to suit them. Had the Ice Warriors merely sat in Moonbase and waited for society on Earth to collapse totally, taking pot shots at the odd satellite sent up to replace some of T-Mat's functions, then this would have been a much more sensible plan.
The seeds are sent to the northern cities where it is winter, so presumably they would not thrive in hotter climes. Trouble is they are susceptible to water, so Ice Warrior scouts have to be despatched down to the planet to disable the local rain-making systems at weather control. Another plot hole here, as you don't need any rain-making technology to make it rain in the northern hemisphere in winter.
We should at this juncture bid a fond farewell to the BBC foam machine, which bows out in this story in a soapy blaze of glory. The plant blight is represented on screen by copious amounts of foam. Watch out for Wendy Padbury's total failure to keep a straight face when she rescues Patrick Troughton from the stuff at the beginning of the final episode. 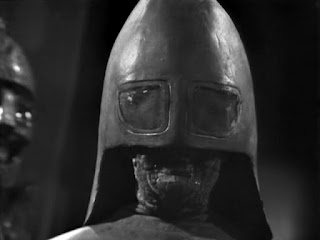 Earlier in Troughton's tenure we were introduced to new "leader" aliens. The Daleks got their impressively massive Emperor, and in the very next story the Cybermen got their big-brained Controller. In their first outing, the Ice Warriors were commanded by Varga, who looked just like his underlings. He spoke in a slow hissing voice, which made complex dialogue scenes just that little bit restrictive. It made sense to have a more voluble leader for the Ice Warriors, one who was not hampered by a thick mask and even thicker accent. Thus we get Slaar, the first of the Ice Lords. Of course, they are never referred to by this title ever on screen, but it is the generally accepted term for them - all played by Alan Bennion. Actually, Slaar is hardly named on screen, though other characters seem to know what he is called. He is not in overall command, however. Above him is the Grand Marshal, whose helmet is covered in sparkly sequins. 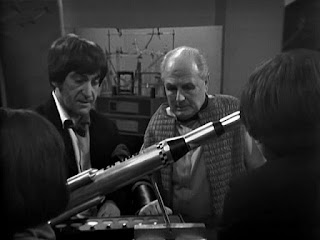 One of the principle inspirations for this story, as far as I can see, is the cuts to the railway network which were prompted by the Beeching Report. Note how the elderly Professor Eldred gets nostalgic for the lost days of spaceship flight, and bemoans the fact that all of the transport eggs have been placed in one basket. Once upon a time, Great Britain had a wonderful railway network. The smallest town in the kingdom had relatively easy access to cheap, regular services. Competition to transport goods and services by road increased after WWII, and to cut losses Dr Richard Beeching was tasked by a Government in the pocket of the road builders to find ways of economising. (The Transport Minister ran a construction company, that built roads). Beeching produced two reports - one in 1963 and another in 1965 - which proposed the closure of 55% of the railway stations, and 30% of the track lines. Some local campaigns were successful, and a smattering of stations and routes were saved. Transport by road may have been cheaper, but huge swathes of the country lost any connection with the rail network, and we were stuck with the traffic choked roads and motorways which we have to endure today. The one thing that the Government failed to realise was the love that people had for railways and trains - especially ones that ran on steam. Steam locomotives were works of art, as well as pinnacles of industrial design. Even the Doctor wanted to drive a steam train, and he came from Gallifrey. Ever since Beeching's axe fell, local groups have brought a number of small branch lines back into use, aimed at the tourist industry. If you want to see all of this crystallised into 90 rather charming minutes, just watch The Titfield Thunderbolt, a classic Ealing Studios movie. This was actually quite perceptive, coming as it did a whole decade before Beeching.
One good thing that did come out of Beeching is the reuse of the old railway lines as walking and cycling routes, of particular interest to nature lovers and fans of industrial archaeology. 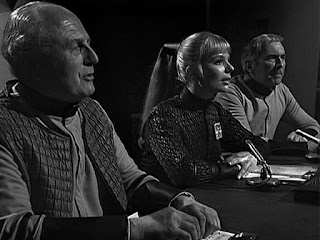 Something of note in this story is the presence of Gia Kelly, who runs the T-Mat programme. She has a male boss - Commander Radnor - and he answers to a male bureaucrat - Sir James Gregson - but it is clear that she is a capable team leader and technician. She doesn't suffer fools gladly, and is quite prepared to ignore her bosses and get her own way on things. This era of the programme is often knocked for its sexual politics (usually when Cybermen are lurking), but Kelly provides a good strong female role model.
Someone who doesn't come out of this story very well is the Doctor himself, however. By creating the infra-red light weapon, he is basically arming himself with a gun. Episode 6 is the first time we see him single-handedly kill someone face to face. Just because the Ice Warriors are bent on invading the Earth, they are still intelligent beings. There will be a lot more of this once Pertwee arrives.
Next time: the start of the 16 week long Great Monster Drought, as we get a Pirates / Western in space.
Posted by GerryD at 22:10