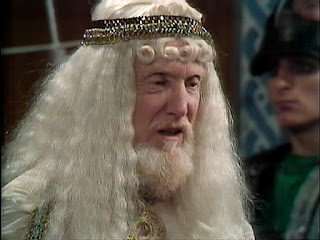 Dalios was the King of Atlantis, who reigned alongside his Queen, Galleia. He was several hundred years old, and remembered when the Chronovore Kronos had first been captured and imprisoned in the city. He was resistant to the creature's release, as advocated by some of the younger members of his court, as he feared it would lead to his people becoming indolent. When the Master arrived in Atlantis, seeking to harness the power of the Chronovore, he claimed to be an emissary from the gods, but Dalios could see through his lies. Galleia, on the other hand, was quickly wooed by the evil Time Lord. She helped the Master overthrow her husband. He was locked in a cell with the Doctor and Jo Grant, where he died from his injuries.