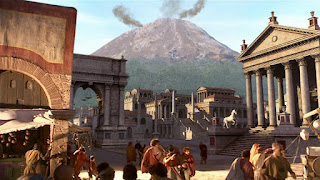 In which the Doctor takes Donna on a trip to Rome at the height of the Empire. As they look around, Donna points out that the city has one big mountain, instead of the famous seven hills. The Doctor realises with horror that they have arrived not in Rome but in Pompeii. It is the 23rd of August, 79 AD, and Mount Vesuvius is about to erupt...
As smoke begins to billow from the summit of the volcano, and earth tremors strike the city, they rush back to the TARDIS only to discover that it is missing. A market stallholder tells them he has sold it to a local marble merchant named Caecilius. Their arrival is being observed by a young woman in red robes, with a painted face. She reports back to her sisterhood - the Sibyllines - to inform them that a prophesy is coming to pass. The arrival of a blue box will signal a time of fire and destruction. The Doctor and Donna go to Caecilius' home where he has set up the TARDIS as a piece of modern art. They claim to be marble inspectors, and announce that they have to impound his new artwork for inspection. They meet Caecilius' family - wife Metella, son Quintus, who is suffering from a hangover, and daughter Evelina. She is ill, and they discover that she experiences visions of the future. Her forearm is bandaged, and beneath they see that her flesh is turning to stone. 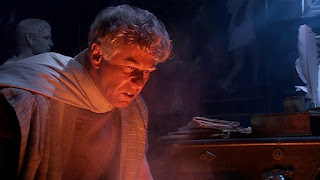 The city's chief augur arrives - Lucius Petrus Dextrus. he has come to take possession of a marble slab which Caecilius has been asked to manufacture for him. The Doctor notes that it has a design reminiscent of an electrical circuit. Lucius and Evelina seem to know that the Doctor is a Time Lord, and that he comes from Gallifrey, and that Donna comes from London. Donna is said to have something on her back, and the Doctor is told that "she" is returning. After Lucius has gone, the Doctor learns that the city is heated by hypocaust vents, fed directly from the volcano. Evelina breathes in the vapours from these vents every day, and the Doctor deduces that this is linked to her prophesies. He bribes Quintus into showing him where Lucius lives. They break in and they discover that he has a number of marble slabs, which join together to make a complete circuit. back at the villa, Donna is abducted by the Sibylline Sisterhood and taken to their temple for sacrifice. The Doctor is caught by Lucius and discovers that his right arm is entirely made of stone. He and Quintus are forced to flee. As they race back home, something seems to be following them under their feet. At the villa, a massive stone creature with a molten core smashes its way up through the floor. It is destroyed when cold water is thrown over it. 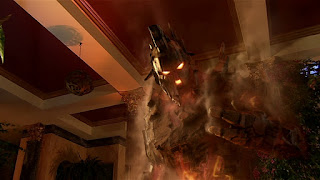 The Doctor goes to the Sibylline temple and rescues Donna. He meets the High Priestess, whose body is almost entirely petrified. From her they learn that beings called Pyroviles live at the heart of the volcano. These aliens crashed here centuries ago, and were reanimated following the earthquake of 62 AD. They are able to bond with humans when they inhale their dust particles - turning them into Pyroviles themselves. Their psychic powers give them their visions of the future. The Doctor is surprised that none of them seem to have foreseen the imminent destruction of the city. He and Donna escape from the temple through a cave system which brings them to the chamber beneath the volcano. The Pyroviles are going to use the marble circuits to power a device that will cause the planet to become habitable for them - but deadly to humans. The Doctor is horrified to realise that in order to stop them destroying the Earth, he will have to trigger the volcano. Pompeii must be sacrificed for the sake of the whole planet. Lucius arrives and tries to stop them. Donna helps the Doctor make the final decision. They are blasted out of the volcano in an escape pod as Vesuvius erupts. Donna wants to help save the citizens, but the Doctor claims that this is a fixed point in time which cannot be altered. She then pleads with him to save just one family, as they return to Caecilius' home to regain the TARDIS. He relents and ushers them into the ship. They move to a nearby hillside and witness the destruction of the city. Some time later, the family have relocated to Rome, where Quintus is now training to be a doctor, and Evelina is free of the Pyrovile taint. The Doctor, Donna and their blue box have replaced their household gods... 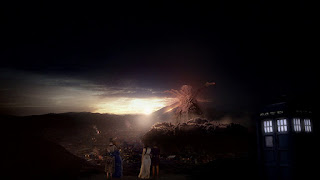 The Fires of Pompeii was written by James Moran, and was first broadcast on 12th April, 2008.
The story is significant for featuring two future stars of the programme - Twelfth Doctor Peter Capaldi (here playing Caecilius), and companion Amy Pond actress Karen Gillan (as the young Sibylline sister who sees the Doctor and Donna arrive). It is also the first story since the series returned to have extensive overseas filming. The city exterior scenes were filmed at the famous Cinecitta studios on the outskirts of Rome.
Russell T Davies had originally intended a story about the destruction of Pompeii for the first series, where it would have filled the 11th story slot which eventually went to the cheap episode Boom Town. The two part story The Empty Child / The Doctor Dances had seen both Captain Jack and the Doctor refer to "Volcano Day". 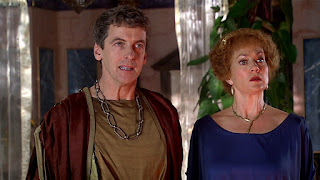 Moran based his Pompeian family on the one that featured in the Cambridge Latin Course text books. The banker Caecilius has a son named Quintus and a wife named Metella, though the daughter of the household is named Lucia in the books.
Metella is played by Tracey Childs, Quintus is Francois Pandolfo, and Evelina is Francesca Fowler. Only Pandolfo got to travel to the Italian location filming. The main guest artist is Phil Davis who plays Lucius. His name - Petrus Dextrus - roughly translates as stone right-hand. Comic actor and Spitting Image voice artist Phil Cornwell plays the market trader who sells the TARDIS. He had played the Ninth Doctor in a Dead Ringers sketch.
As well as numerous references to past stories - and even a future one - there are a number of Series 4 story arc points present:

Overall, it is an excellent episode. Initially rather funny - with Roman-related jokes - it inevitably has to turn deadly serious. The sequence showing the destruction of the city is incredibly moving thanks to VFX, music and performances. Catherine Tate, in these final scenes, is superb. Voted a healthy 71st place (out of 241) in the DWM 50th Anniversary Poll. I gave it a 10.
Things you might like to know:
Posted by GerryD at 23:13