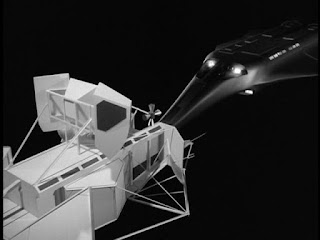 Written by Robert Holmes. This story was one of those last minute commissions which characterise the final half of the final season for Patrick Troughton. We've already mentioned how a number of scripts have had to be abandoned late in the day. Holmes was deemed a good, strong writer, who could deliver a workable story at short notice, so he was invited back quickly after contributing The Krotons.
His first idea was what would eventually be turned into a BBC radio drama called Aliens in the Mind, starring Vincent Price and Peter Cushing, made in 1977. It is set on a remote Scottish island, and involves telepathy and mind control. The earlier Doctor Who version was called "Aliens in the Blood". The radio adaptation was handled by someone else, as Holmes was busy on Doctor Who in 1977.
The story was rejected, and Holmes was tasked with devising something else. For inspiration, he only had to look at the sort of adventure films and books he had always enjoyed.
The main inspiration lies in the story title. It's all about piracy, but instead of the Seven Seas we are in deep space. The principal pirate - a man named Caven - isn't just raiding ships, however, he is stealing them wholesale. Actually, the ships in question are unmanned navigation beacons, and he is stealing them to break them up and melt them down in order to sell their metal - a particularly rare and therefore precious mineral called Argonite. 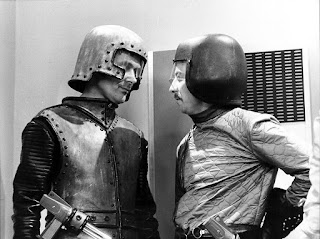 Pirates were very popular in fiction back in the Victorian period, but their cinematic heyday was relatively short-lived, centred round the middle of the 20th Century. Many movies were adaptations of literary classic such as Jamaica Inn or Treasure Island. Despite the fact that they featured sea-going criminals, many of these movies glamourised the pirate as Hero - either up against a more villainous pirate captain, or the authorities (usually the British navy, presented as the baddies). Back in 1935 we had Errol Flynn as Captain Blood. Burt Lancaster was The Crimson Pirate in 1952, and then there was Tyrone Power in The Black Swan. Even Bob Hope got in on the act with The Princess and the Pirate, in 1944. As well as their adaptation of the Dr Syn novels (see The Smugglers) Hammer contributed The Pirates of Blood River in 1962.
The pirate movie continued strongly on the continent, being a particular favourite of Italian cinema-goers, but for British and American audiences they had rather fallen out of fashion after the 1960's.
There were some attempts to translate the genre into either modern times (e.g. The Island) or as science fiction (e.g. Waterworld). 1995 saw a big budget attempt to do a full-blooded pirate movie, with Cutthroat Island. This did not do well at the box office. Then, in 2003, we got Pirates of the Caribbean: The Curse of the Black Pearl. This was the first of what has become an incredibly successful franchise, based on a Disney theme-ride. The most recent film was released in 2017.
It is to books like Treasure Island, and those classic Hollywood films with Lancaster, Power and Flynn, that Holmes would have looked for inspiration. 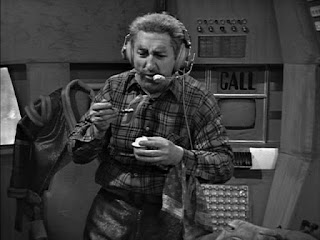 Scratch the surface of The Space Pirates, however, and there is clearly another genre lurking not very deep beneath. The story is as much a Western in space as it is a pirate adventure in space. In particular, it is a story about the 19th Century Gold Rushes of California and the Pacific North West.
On 24th January 1848, gold was found at Sutter's Mill, Coloma, California, by James W Marshall. When word got out, several hundred thousand people headed for the area to stake a claim and hope to strike lucky. The peak was in 1849 - hence the nickname for prospectors of 49'ers.
Forty years later, more gold was discovered in the north west areas of the Yukon and Alaska, centering on the Klondike River. This led to another Gold Rush. Owing to the harsher terrain, only around a third of those who set off to capitalise on the rush actually made it.
Many movies have been made about these events, and there are a number of significant writings - such as the works of Jack London and Robert W Service. (Side note: Service's father came from my home town - Kilwinning in Ayrshire). The lawlessness of the prospecting communities can be summed up in The Shooting of Dan McGrew, by Service. (It's the poem Miss Marple uses as an audition piece in the 1964 film Murder Most Foul, starring Margaret Rutherford).
In Holmes' story, these pioneer prospectors are embodied by the character of Milo Clancey. Despite being set in the far future, and with the rest of the cast in spangly silver costumes, Clancey is given a rough lumberjack-style checked-shirt to wear. From the waist up he looks like he has stepped out of a Western. And he has the accent to boot. 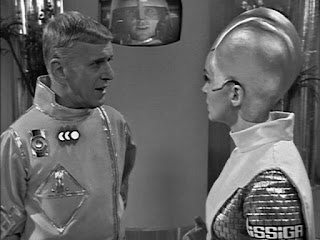 Caven isn't just stealing and breaking up the navigation beacons, he is also robbing the Argonite shipments of miners like Clancey. Most fiction relating to the Gold Rushes features a degree of lawlessness - with claim-jumpers or bands of thieves stealing the miners' hard earned efforts. In the Klondike, the authorities were amongst the worst offenders, though the vast majority of crime related to what used to be called camp followers - the sex industry that grew up around the mining towns.
If Clancey is an Old Timer, 49'er, then General Hermack and his International Space Corps would be the US Cavalry, bringing lorr and orrder to the frontier zones, as Major Warne might have said it.
This region of space is basically the Wild West. 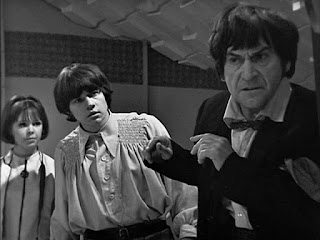 Interestingly, Holmes spends quite a bit of time setting up his characters, to the point that the Doctor, Jamie and Zoe don't actually turn up until more than half way through the first episode. This was partly due to Troughton wanting to have an easier time of it on the show - one of his conditions for doing a third year. One of these conditions involved not having to come out of rehearsals on the next serial to do the filming, or to have to film on scheduled days off. As the following story - The War Games - was to have a massive amount of filming, it was agreed that the main cast's roles in the final episode could be committed to film in advance of the episode being studio recorded. This is the only episode other than Mission to the Unknown where there were none of the regulars present in the studio for the evening's recording.
The other thing to say about this story is that it attempts to make space travel look authentic. Spaceships take an age to get to where they are going - no Warp Factor 9 here. This is commented upon in the story itself, as Hermack bemoans the fact that the pirates will have left the scene of the crime before they can get to it. Kubrick's 2001: A Space Odyssey had made space flight more mundane, but this was not new. Some of those 1950's Sci-Fi films had tried to imagine what it would really be like, and had made use of genuine space research scientists in their production (such as Wernher Von Braun acting as technical consultant on Conquest of Space in 1955).
Next time: It's the end of an era in oh so many ways. He is going, but They are coming...
Posted by GerryD at 22:42