D is for... Darkening, Erasmus 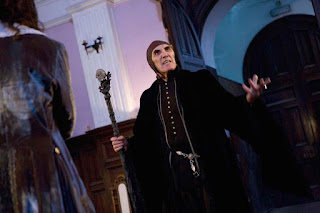 In 17th Century England an alchemist named Erasmus Darkening was welcomed into the home of Lord Marchwood - Ashen Hill Manor. He stayed with the family for two years, during which time his experiments to make the family rich came to nothing. Darkening was really an alien scientist who had become trapped on Earth, and his real work was to try to establish a portal to his own dimension. This portal caused others to become trapped between dimensions, including Lord Marchwood's children. Marchwood turned on him and attempted to run him through with his sword. This caused the device powering the portal to become damaged. Darkening began to live off the life force of those he had trapped, making him immortal. In the present day, the Manor gained a reputation as a haunted house, leading Professor Rivers and her young research assistant Toby to spend some time there conducting experiments. They were visited by Sarah Jane Smith, Clyde and Rani. Sarah did not believe in the supernatural, but soon they were all presented with strange phenomena. Sarah then met Lord Marchwood, who had been trapped in the house for centuries looking for his lost children and trying to protect others from Darkening. Marchwood helped Sarah lure Darkening into a trap, ensnaring him in an electromagnetic field which destroyed him. His device was wrecked, and the trapped souls were freed.