D is for... DeMarco, Clarence 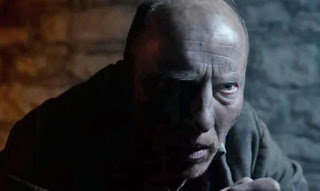 A vicious serial killer who had murdered 14 women. DeMarco had been brought to justice by the Great Detective - Madam Vastra. He was scheduled to be hanged when he was visited in his cell by a trio of ghostly blank-faced figures - the Whisper Men. They were servants of the Great Intelligence. They informed him of a secret which he might use to save his life. He called for Vastra to visit him in prison and told her what he had learned. This was a secret about the Doctor - one that "he will take to his grave, and it is discovered".
This was a reference to the Doctor's grave, on the planet Trenzalore. Vastra agreed to a stay of execution, whilst she investigated this message further.

Played by: Michael Jenn. Appearances: The Name of the Doctor (2013).